Aksai Chin is a high altitude cold desert with large nos. of soda lakes. It is the region between Karakoram Ranges and Kun Lun Ranges

For India, it was country’s only gateway to central Asia after the partition in 1947. For China, the remote western provinces of Tibet and Xinjiang were effectively separated by Indian possession of Aksai chin and prevented it from movement of armed forces from Tibet to Xinjiang and vice-versa, regions where there was considerable unrest. Sometime in the decade of 1950’s, Chinese decided to construct a road joining Tibet and Xinjiang illegally, in the Indian territory. 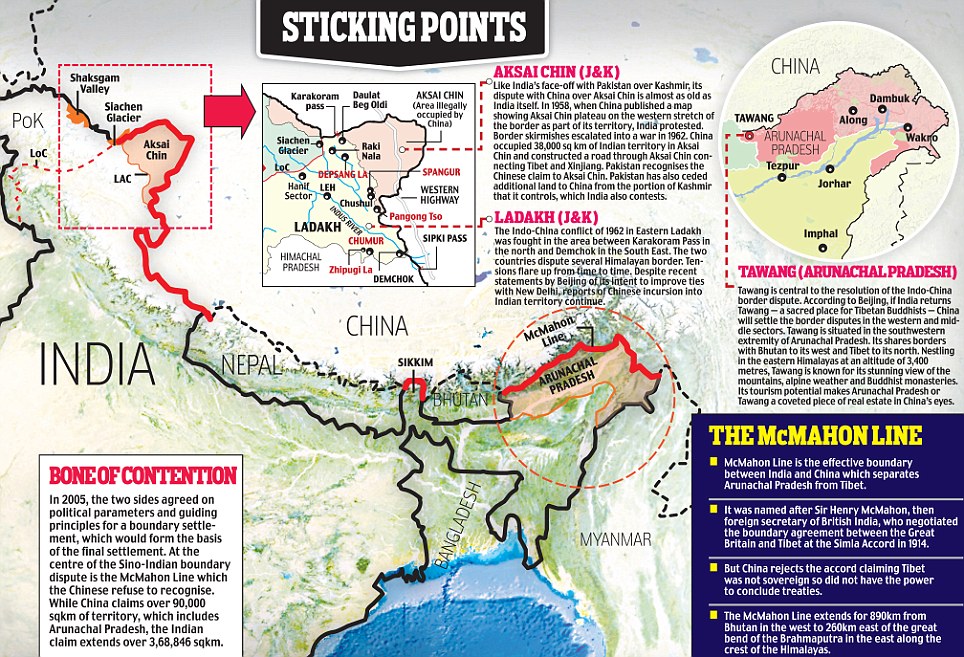 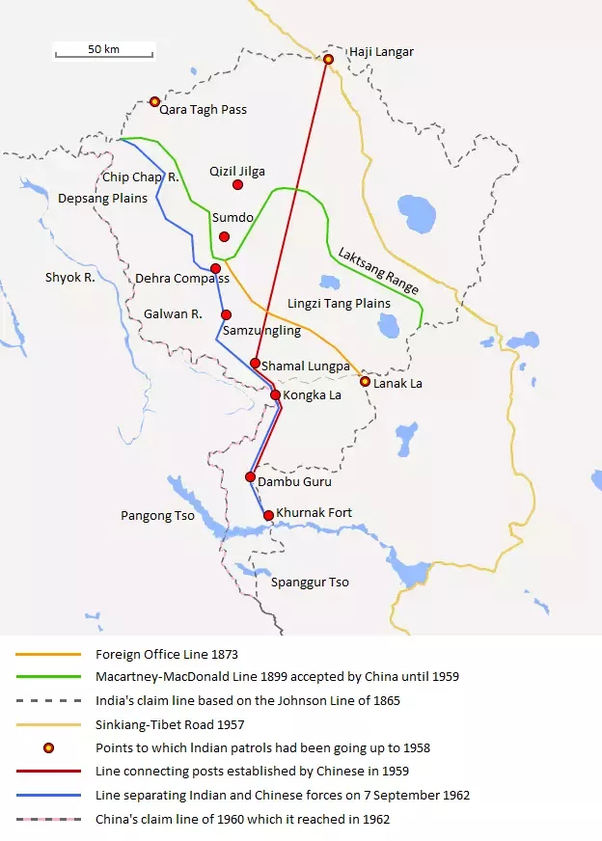 SOURCES WHICH STATE THAT AKSAI CHIN IS PART OF INDIA

A tripartite meeting of the British administration in India and representatives of Tibet and China was held in 1913 at Shimla in India. A draft treaty was agreed upon during this meeting. This agreement is known as Shimla treaty. According to the terms of this treaty, the relationships and borders between these three countries,namely India, Tibet and China, were fixed and agreed upon. However,even though the Chinese representative attending the meeting, Mr.Ivan Chen had initialed the draft treaty, he refused to put his country’s official seal on the paper. Subsequently, the Government in Beijing declared that this treaty was unacceptable to China.According to representatives of India and Tibet, since the treaty was mainly about the relationships and the borders between two sovereign countries, India and Tibet, they believed that the Chinese representative had merely attended the meeting as an observer and his approval or disapproval had no bearing on the proceedings of the treaty. Eventually another meeting was held in July 1914 between representatives of India and Tibet and the draft treaty was finally approved, initialed and sealed. In this accord, it was agreed that a region spread over 14380 square miles and known as Aksai chin: located east of Ladakh, between Karakoram mountain range and Kun Lun mountain ranges, would be part of British India. The region of Ladakh in those days, was part of the princely state of Jammu and Kashmir. In fact, old references show that the state administration used to have a small police outpost at Shahidulla( Located on present Tibet- Xinjiang road) in this region. 2. According to the Explorer William Moorcroft who extensively travelled in Himalayas, Tibet and Central india and was employed by East India Company put India-Tibetan Border at Lanak La.

3. Their are substantial Kashmiri Government record for the area of Chang Chenmo Valley between Lanak and Kongka La Pass. In addition to the revenue records, Ladakh Settlement Report (1908), Report of several survey team, J&K Game Preservation Act (1951), Kashmiri document relating to the construction and maintenance of trade routes, rest houses and store houses in the Chang Chenmo valley. All of them placed the entire valley upto Lanak La pass within the Ladakh.

4. Indian sources state that there were no Chinese troops in the area till 1952, that Indian troops patrol till Lanak La Pass until 1958 and there was Indian Flag planted there until 1956.

After India became independent, the responsibility of defending this region was given to ITBF or Indo-Tibetan Border Force. Since the region became quite inaccessible during winter months, patrols were run by the ITBF during summer time to Aksai chin.

In 1952, Indian Patrol party first came to know about the idea of the Chinese constructing road the region

Till 1955, the Chinese People’s Liberation Army presence was minimal in the sector

But the road the Chinese were constructing completed in 1957 (Chinese National Highway G 219)  connecting their Xinjiang and Tibetan Province cutting through the Aksai Chin. Announcement was made from Beijing and the announcement was published in the People’s Daily which also presented a map of the region showing Aksai Chin as Chinese territory. In 1958, it was impossible for Indian Patrol team to go to Lanak La without being detected by PLA units.

Till 1959, Indian Government did not take any action did not take any action because Nehru did not want to deteriorate the Sino-Indian Relations and Nehru thinks that China is India’s great friend but Tibetan Rebellion (1959), Dalai Lama seeking asylum in India and Konkga La Pass Incident (1959) pressurized Nehru and then Defence Minister Krishna Menon to chance their stance on Indian – China relations.

Both the countries are interested in Aksai Chin. It is more of an matter of prestige rather an strategic importance.

British created two buffer states between British India and China, namely Kashmir and Tibet. While Tibet was forcefully annexed by China, Kashmir became a part of Indian Union after the erstwhile king of Kashmir signing the Instrument of Accession to India in 1947.

Chinese have considered the era between 1839 to 1949 as the Century of Humiliation. China lost the Opium war with British, fall of Qing Dynasty and it was in control for a short period under the Imperial Japanese Empire during these 100 years. China says that they haven’t signed to any border demarcations agreement with the British after the Sikh War in 1830s, which stated Arunanchal Pradesh and Aksai Chin was an part of British India.

As the current ruling government is initiating nationalist feelings in the Chinese population, for them Aksai Chin and Arunanchal Pradesh is more of a prestige issue rather highway connect between Tibet and Xinjiang region in the land-locked Western region of China. China already has superior technology to construct road links from Tibet to Xinjiang region instead of using Aksai Chin for the same.

India rather has less military control to Aksai Chin from the Srinagar End, but has a legal say to the region because of the border demarcations laid by the British in 19th Century and Accession of Kashmir in 1947. It is strategically important to India as it connects the Central Asian nations very easily, thereby would prove useful for India to develop the Kashmir Valley.