When Pandavas marched towards the forest to serve the next thirteen years in exile, a lot of Brahmanas followed them. The entourage stopped at the banks of River Ganges to spend the night. The next morning, Yudhishtira pleaded the brahmanas to return, citing the dangers and difficulties involved with forest lifestyle. He also added that his brothers who would normally procure food in the forest were distressed by Draupadi’s grief and the loss of their kingdom. For this reason, Yudhishtira said that he could not employ his brothers in painful tasks.

The brahmanas refused to return and told Yudhishtira that they would not be a burden for the Pandavas. They added that they would source food on their own. Hearing this, Yudhistira fell into despair, saying “How can I let you procure food on your own, who are accompanying me because of your love and affection towards me. My fallen condition has made me hold myself contempt”. Saying this, he started crying.

A wise brahmana by the name Saunaka consoled Yudhishtira and told him not to grieve. Saunaka said the following of grief:

Thus addressed by Saunaka, Yudhishtira regained his composure. He approached his priest Dhaumya and asked, “The brahamanas wish to follow me into the forest but I do not have any means of sustaining them. Tell me what should I do”. Dhaumya thought for a moment and said, “In the days of old, all living beings that had been created were sorely afflicted with hunger.  Surya, taking compassion upon them, drew up water by his rays. The moon converted those vapours into clouds and showered rains which created plants that sprouted. Thus the Sun is said to be the father of all creatures. You should meditate upon Him for your rescue”. Saying this, Dhaumya also taught Yudhishtira the  108 names of the Sun. 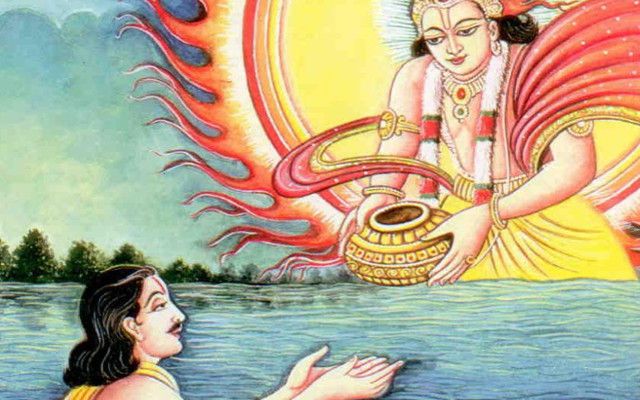 Subsequently Yudhishtira meditated on Surya and sang hymns praising Him. Gladdened by his act, Surya appeared before Yudhishtira and gave him a vessel. He said, “This vessel will feed an inexhaustible supply of food each day, until Draupadi partakes her portion of the food. The vessel will feed you for 12 years henceforth.”

The Pandavas became exceedingly glad as this provided them with sustenance for themselves and the accompanying brahmanas. Soon, accompanied by the Brahmanas, the Pandavas set out into the woods of the Kamyaka forest.

The news of Akshaya Patra reached Hastinapur. Eventually, Duryodhana heard of the autocratic hospitalities offered by the Pandavas and he was livid. He wanted to do something that would tarnish the Pandavas.

Durvasa was a powerful sage with great magical abilities which he attained long penances to the demigods. He was renowned for his short temper. A lot of people were cursed by Durvasa and suffered a great amount of misery. On the contrary, if he was pleased by the hospitality of his guests, Durvasa granted boons to them. 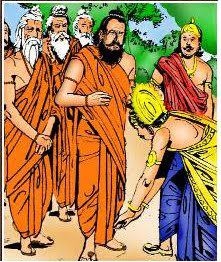 Duryodhana invited Durvasa to his palace. He provided hospitality with utmost care to make sure he doesn’t fall into Duruvasa rage. Then one day Duryodhana was having a conversation with the sage, he told him about the Pandavas hermitage in the forest and their hospitality is impeccable. He requested him to pay the Pandavas a visit and also added that he ought to visit after Draupadi had eaten, then she would have more energy to serve. Durvasa agreed with Duryodhana and thus the sage and his Shishyas set out to the humble abode of Pandavas in the forest.

On that fateful day, the Akshaya Patra was given to Draupadi by Maharaja Yudhishthira as she would serve everyone and then eat what is left in the Akshaya Patra. And hence after she ate and cleaned the vessel there would be no more food left in the Patra. That’s when Durvasa and his Shishyas approached the Pandavas’ hermitage late in the evening when Draupadi had already finished eating and cleansed the Akshaya Patra. She trembled on the sight of Durvasa as she knew he would curse them very badly if he wasn’t treated well.

Maharaja Yudhishthira happily welcomed the sage inside. Little did he know, about the consequences. He asked Durvasa to take bath and assured that the food will be ready by the time he returns. Dharmaraja sent Sahadeva to inform Draupadi to prepare food. He found Draupadi closing her eyes and praying. Sahadeva understood the gravity of the situation and went to bring Yudhishthira. When he came, he saw Lord Krishna before Draupadi shining bright. Lord Krishna asked Draupadi to show him the Akshaya Patra to which she said there was nothing left and she cleaned it completely with her very hands. Yet, Krishna demanded the Akshaya Patra be brought before him. He took the single grain of rice left in the Akshaya Patra and said that was the most delicious meal he had eaten while he ate the rice grain. 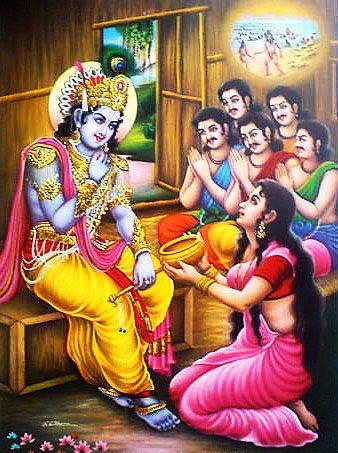 In the house, Maharaja Yudhishthira asked Krishna what to do as there was nothing left to serve Durvasa. Krishna asked him to go bring Durvasa inside. Dharmaraja sent Sahadeva to bring the guests in and to his surprise he could not find Durvasa or his Shishyas anywhere around the lake.

Lord Krishna smiled at Yudhishthira and said the food was very delicious. I shall visit you more often.

This miraculous divine episode happened on the day which is commemorated as “Akshaya Tritiya” every year, and it occurs around the time of the spring harvest in April-May every year.