In all likelihood, yes. The Pallavas, who reigned from 275 AD to 897 AD, were Telugus. They definitely had Telugu lineage on a parental line. 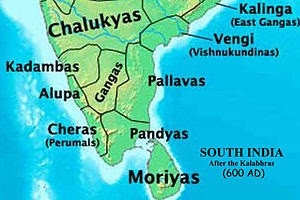 There are several proofs for this, which I will discuss below. I will also have a conclusion-section:

The name of an empire gives us an insight into their origins. Pallava means branch, creeper, or sprout. It is a Sanskrit word, and derives from पल्लवः .[1] A Quoran and Linguistics Professor, Uma Maheshwar G, has also confirmed this in a previous comment. The word is not of a Dravidian language origin.

In fact, the Pallavas had different names in Tamil that were later adopted. They were called “Tondai” and “Kaduvetti”. In fact, the Tamil words for this dynasty was not used in its early stages. The Velurpalaiyam Copperplates state that the first Pallava ruler’s father was a man named as Chutu Pallava. [2] So it is clear that Pallava, a name derived from Sanskrit, was what they identified with in their early years.

It is a well known fact that Tamil Kings proudly retained and promoted the Tamil language. For instance, the name “Pandya” and “Chola” are generally considered to be of Tamil-origin. The fact that Pallava is not derived from Tamil indicates they were not Tamilians to begin with.

At the same time, we know Telugu was already an independent language by this time period and was influenced by Sanskrit. Telugu rulers often used Sanskrit names and their empires were often dubbed with Sanskrit-based names, such as the Ananda Gotrikas and the Andhra Ikshvakus. The two kingdoms I listed reigned just before/around the time of the Pallavas, and so it is clear that Telugu rulers had no qualms in embracing Sanskrit.

Tamil records of the Pallavas were not available until the 7th century.[4] To give some context, the empire was established in the 3rd Century. So for 300–400 years, we do not have Tamil inscriptions issued on a large-scale from the Pallavas.A Quoran cited a Pallava ruler named Nandivarman and how him being versed in Tamil literature is proof that the Pallavas were Tamils. Nothing of the sort.

Firstly Nandivarman II may not even be from India! Nandivarman is from a distant-line of the royal family and is believed by some historians/scholars, such as T.V Mahalingam and Sanjeev Sanyal, to be a South-East Asian (Cambodia and Vietnam).[5][6] He became the Pallava ruler due to a lack of an heir, and the Pallava officials literally had to go fetch him. In fact, if you visit the Vaikunta Permul Temple that was constructed by Nandivarman, you will see some face carvings having South-East Asian features. Setting aside that, Nandivarman II ruled in the 8th century, which is after Tamil inscriptions started popping up. So, it fits the larger pattern and is not an anomaly.

With that aside, early inscriptions of the Pallavas were Sanskrit or Prakrit, which again, fits the pattern of Telugu rulers of this time period. The Andhra Ikshvakus, for instance, issued numerous inscriptions entirely in Sanskrit or Prakrit. This does not fit the pattern of Tamil Kings. Generally, Tamil kings issued their early inscriptions in Tamil, though they later had Sanskrit as well. For example, the Mangulam Inscription of the Pandyas, which is the earliest epigraph from them, was written in Tamil, not Sanskrit.

Moreover, these early Pallava inscriptions are found exclusively in the districts of Guntur and Nellore until the reign of Simhavishnu.[7] There is a region in Guntur called “Palnadu”. This derived from “Pallavanadu”, and this is the area where the Pallavas are said to first have begun their reign, as per the work of non-Telugu scholars.[8]

Tamil literature often mentioned and glorified Tamil kings. However, there are mentions of a certain Trilochana Pallava as the foe of the Cholas (who ruled vast swaths of Tamil Nadu) in the Karikala Literary traditions and in the Chendalur Copperplates of the 5th Century (Well after the Pallavas became established rulers). K. R Subramanian remarked that this adds further weight that the Pallavas were not Tamilians but invaders of the Tamil lands.

An interesting thing is that later Tamil works claimed that the Pallavas were the illegitimate progeny of a Chola ruler and a Naga princess and goes on to discuss a legend. Of course, this again adds evidence against a Tamil origin. By attempting to say that the Pallavas were illegitimate progeny and owe their existence to a Chola ruler, Tamil literary commentators are showing hostility to the Pallavas. It is no secret that Pallavas and Cholas had serious conflicts over territory. In the context of such hostility, by portraying the Pallavas as the illegitimate progeny of the Cholas, which by all accounts is a frequently used insult to demean someone, late Tamil literary commentators were displaying hostility to the Pallavas. Moreover, we knowthis is claim is not true based on Pallava Inscriptions, which I will discuss in the Genealogy-Maternal Side section.

This truly is the interesting part. The Pallavas have all sorts of theories about their paternal line, including that they are related to the Pahlavas of Persia or that they were migrants from Northern India. It is hard to prove these claims, but it is plausible that the Pallavas on the paternal line migrated from the North and settled in South India. This was not uncommon. Many migrations took place from the North to the South and vice-versa. For instance, a kingdom that reigned just before the Pallavas, the Andhra Ikshvakus, hired hordes of Scythian soldiers and guardsmen who migrated from Northern India to settle in Andhra. 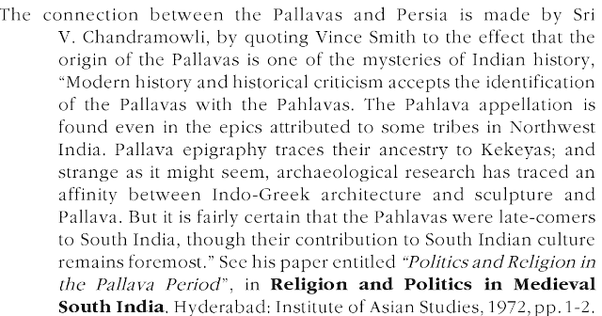 (Source: From Majapahit and Sukuh to Megawati Sukarnoputri: Continuity and Change in Pluralism of Religion, Culture and Politics of Indonesia from the XV to the XXI Century)

Not only that, Abraham Eraly, an Indologist, also noted:

“There is a strong possibility that the Pallavas were a branch of the Pahlavas (Parthians) who entered the Indus Valley from Central Asia in the second century BCE, but were in the next century driven out from there by the Sakas.”[9]

Then we had scholars, such as Nilakantha Sastry who believed in a North-Indian migration theory, and K.P Jayaswal tried to draw connections between the Pallavas and the Vakatakas.

To quote R. Gopalan and Sakkottai Krishnaswami Aiyangar on the reasons why these theories are flimsy:

“This theory, however fascinating to the imagination, rests altogether on thesuperficial verbal resemblance of the words Pahlava and Pallava.2 There is no evidence whatsoever, as Mr. Venkayya himself admits, that the Pahlavas of the west moved into the east anytime during the second century A.D. At any rate there is no reference or reminiscence whatever in the large numbers of Pallava copper-plate inscriptions of any such migration.”[10]

In fact, this is not the only time this has happened. Some historians have attempted to connect the Chalukyas to the Seleukia tribe of Iran-Iraq merely by the similar sounding names. Of course, this claim is also very unlikely to be true. In fact, the Chalukyas attempted to claim North-Indian roots, as did many other South-Indian kingdoms, such as the Andhra Ikshvakus. These claims were mostly rubbish and were done to draw connections to established and legendary dynasties of the North, such as the Ayodhya Suryavanshi Ikshvakus.

Despite such a trend and “fashion” to claim this migratory status, the Pallavas never did. So although it is not clear on the exact details in the paternal line, we can say that they were not the progeny of a Chola Prince (this was based entirely on propaganda pieces to demean the Pallavas), and they probably are not connected to the Pahlavas or migrants from the North, though it is a plausibility.

What we can conclude is that their paternal line was not native to Tamil Nadu. The Pallavas themselves acknowledged in the Velurpalaiyam Copperplates that it took 3 generations to capture Kanchipuram, which itself is in extreme-Northeast Tamil Nadu near the Andhra border.

This is an easy and less confusing part. The Pallavas on the maternal side are acknowledged by all sources to be connected to the Nagas. Virakurcha is considered to be the first ruler of the Pallava Dynasty (note: likely not the first Pallava). According to Pallava records, he married a Naga princess and through that martial alliance, he attained power. Now we know that Virakurcha’s father is Chutu Pallava, so the claims of some historical Tamil commentator that the first Pallava ruler was the illegitimate child of a Chola goes out the window as nothing more than propaganda.

Anyways, so who are the Nagas?

To quote from D. Ananda Naidu, Gangisetti Lakshminarayana, and V. Gopalakrsna, who are scholars affiliated with Dravidian University, a renowned institution for the study of languages, culture, and history of South India:

The language of the Nagas appears to be Telugu, which the earliest reference to which is found to be in the earliest Tamil-grammar, the Tolkappiyam (5th Century AD).[11]

It is also important to keep in mind that the Nagas differed from the Andhras, who later moved into these areas and settled. The Andhras were speaker of Prakrit and trace their roots to Sage Vishvamitra. It is likely that these two-groups inter-married as the mixing of all Indian groups went on till the Gupta-Period. It is a possibility that the paternal-side of the Pallavas were Andhras since they had a very close relationship with Sanskrit and Prakrit in their early inscription.

The Nagas can be considered as the “First Telugus” and inhabited what is now the Telugu regions for ages. To quote B. Ramaraju

“This is a prehistoric celebration of Naga or serpent-worship observed throughout Andhra. Buddhistic and other records mention that once Naga tribes inhabited this part of the country called ‘Nagabhumi’ (land of the serpent god). Every village in Andhra has some or other Naga idol carved in stone or wood.”[12]

Indeed, the worship of the serpent is very common in Andhra and may be the cultural gift of the Nagas. For instance, నాగుల చవితి (Nagula Chavithi – Holy day of the Serpent) is a famous religious day celebrated in the Telugu regions where people, mainly women, go to snake pits/ant hills, which mostly do not have snakes, to worship the nagadevata (snake) on this day. Some also do worship through carvings of snakes on rocks.

Anyways, it is clear that the Nagas were likely Telugus. At least, the maternal side of the Pallavas is for sure Telugu.

I know that was a lot to take in. If you want to go back and re-read it for better understanding, I recommend it as this is an important topic.

To summarize what I have said:

We know the Pallavas are Telugus on the maternal side as the Nagas were considered to be Telugus. The Pallavas on the paternal side may be migrants from the North or the Pahlavas, but as the Pallavas themselves never claimed such migrations, we can assume they were Sanskrit-Prakrit speaking inhabitants of the Telugu regions. Inscriptions, literature, and the etymology of the word “Pallava” indicate the same thing.

Outside of this piece, many scholars agree that the Pallavas were Telugus, such as Gabriel Jouveau-Dubreuil, D. Yashoda, G. Satyanarayana Rao , K.R Subramanian, Cynthia Talbot, and etc. Many of these scholars are/were not Telugus. Hence, it is not regional biases behind their conclusions.

I will end my piece by showing a snippet from the work of K.R Subramanian. 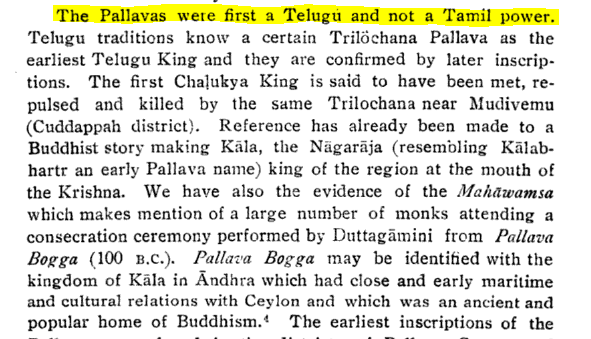 (Source: Buddhist Remains in Andhra and the History of Andhra Between 225 and 610 A.D.)

[4] A History of Ancient and Early Medieval India

[10] History of the Pallavas of Kanchi by R. Gopalan