It was an event full of drama, controversy, gossip, a (perceived) pantomime villain, a (perceived) hero of the people. We explore into what happened, why it happened and what it led to.

It was late early 2005. The contract of the coach of the Indian cricket team at the time, John Wright, was coming to an end and he did not wish to renew it, citing personal reasons. So, the hunt was on for the next coach. There were many contenders in the race – Jimmy Amarnath, Tom Moody and Dav Whatmore among others, however, out of the blue, came the recommendation for Greg Chappell from none other than the captain (Ganguly) himself.

Regardless, Ganguly stood firm in his recommendation and finally, the board agreed and appointed Chappell the head coach of the team in May 2005. Ganguly was delighted and Chappell too was looking forward to the role.

When Chappell took over, his first assignment with the team was a trip to Sri Lanka for an ODI tournament. Ganguly was not to be a part of the tour as he was suspended by the ICC for 6 matches due to poor over rates in a previous series. Dravid was appointed skipper for the series.

Before the first test, Chappell felt that India must always field its best 11, even if it was at the expense of an out of form Ganguly giving way to a younger, in-form batsman, with an eye to the future as well. This enraged Ganguly, who thought it an attempt by Chappell to remove him from captaincy, and he threatened to walk out of the tour and return back home. Better sense prevailed when Dravid and Chappell coaxed him to stay on. He stayed on and played the first test as captain, scoring a century to boot. 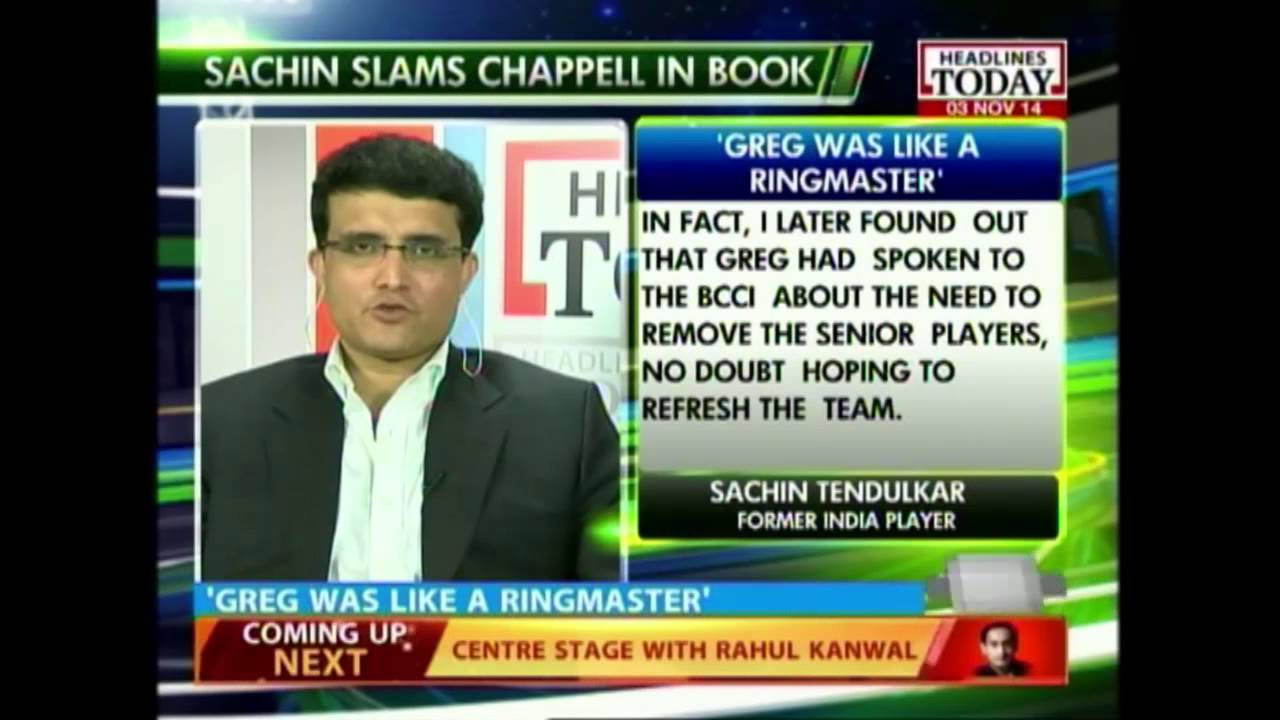 After the test match, Ganguly made a comment to the media that he was being ‘pressurized’ to give up the captaincy by certain team officials. Speculations were rife and fingers were pointed at Chappell who came out in his defense by stating that he would never pressurize anyone to do anything. He also said that the private conversation he had with Ganguly was to motivate him.

It was during this tour that an email sent to the board by Chappell was leaked to the media in which he felt that Ganguly was just ‘desperate’ to retain the captaincy and that he felt that Ganguly was ‘mentally and physically’ unfit to lead the team India’s next assignment was a 7 match ODI series against Srilanka in October 2005. With India doing well after 4 games, Ganguly was not added to the squad when the team for the remaining fixtures was announced.

In the test series against Sri Lanka that followed, Ganguly did make a come-back against into the team but Dravid was appointed captain of the test team and Sehwag vice-captain as well. 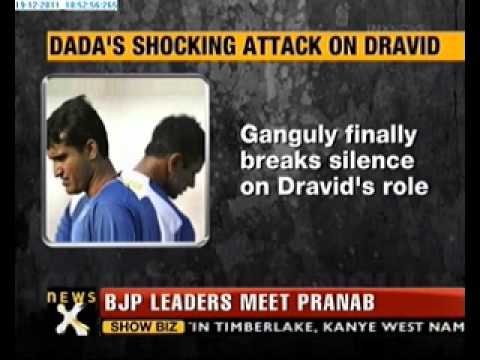 His hard work was noticed and while he was ignored (as had been the norm) from the ODI team to tour South Africa, he was recalled to the Test team to tour the country. He performed admirably in the warm-up game before the first test and was picked into the playing 11 for the first test. He scored a 51 in his first innings back and played well throughout the three test series to be the highest run-getter for India in the series.

This poor performance created enough pressure on Chappell as well and he resigned from his post as coach of the team.

The Chappell–Ganguly controversy was caused by a series of events in late 2005 and early 2006 which involved highly publicised infighting in the Indian cricket team between the then newly appointed coach Greg Chappel and captain Sourav Ganguly. The dispute resulted in the removal of Ganguly as captain and his replacement by vice-captain Rahul Dravid in November 2005, with Ganguly being dropped from the ODI team. Ganguly was also dropped from the Test team at the end of January 2006. The dispute stirred up strong emotions in India, ranging from fiery street protests in Ganguly’s home town of Kolkata and his home state of West Bengal, to speeches in the Parliament of India.

Eventually Ganguly was recalled to the team in both forms of cricket in late 2006 after his replacements lost form, and was selected as a part of the Indian team for the 2007 Cricket World Cup.

The controversies and tensions surrounding Sourav Ganguly, Rahul Dravid and Greg Chappell came to an end after India’s poor performance and early elimination from the 2007 Cricket World Cup. Ganguly was selected as part of the team under the captaincy of Rahul Dravid. India was seen as one of the favorites to win the tournament, but senior BCCI officials indicated that India’s performance would decide the future of Greg Chappell’ stormy tenure with the Indian team, and determine the credibility of his coaching methods.

India’s fortunes were immediately endangered after a stunning defeat to the Bangladesh in its opening group match. Sourav Ganguly top-scored with 66, but he was criticised for scoring at a slow run rate. Although Indian batsmen amassed more than 400 runs for an easy win over the newcomers Bermuda in their second match, Ganguly scoring 87, the media still severely criticised the team leadership and the players. India faced a must-win situation as it faced-off against Sri Lanka in its final group match. Sri Lanka scored more than 250 runs to set a challenging target for the Indian batting order, which failed dramatically. For all practical purposes, India’s World Cup campaign ended with its defeat to Sri Lanka, although it was not formally eliminated until Bangladesh achieved its predicted victory over Bermuda in the final group match.

Facing a barrage of criticism and public anger, and lack of support from the BCCI, Greg Chappell resigned as India’s coach. After much deliberation, the BCCI decided to retain Rahul Dravid as India’s captain for the summer of 2007, but chose not to appoint a high-profile coach for the time being. Former Indian players Venkatesh Prasad and Robin Singh were appointed as specialist bowling and fielding coaches respectively, and former Indian captain Ravi Shastri was temporarily appointed as coach-cum-manager for India’s tour of Bangladesh. Shastri was succeeded as manager by Chandu Borde for India’s tour of England.

Ganguly emerged with prolific figures in both Test and ODI cricket in the year 2007. He scored 1106 Test runs at an average of 61.44 (with three centuries and four fifties) in 2007 to become the second highest run-scorer in Test matches of that year after Jacques Kallis.

He formally retired in 2008. In 2008, veteran South African batsman Gary Kirsten was appointed head coach of the national team after a less-publicised selection process. Kirsten brought in Paddy Upton as a mental coach, and Prasad and Singh were retained in their specialist roles.

In November 2014, in his autobiography Playing It My Way, Tendulkar criticised Chappell, calling him a “ringmaster who imposed his ideas on the players without showing any signs of being concerned about whether they felt comfortable or not”. He said that, “His attitude to Sourav was astonishing. Chappell is on record as saying that he may have got the job because of Sourav but that did not mean he was going to do favours to Sourav for the rest of his life. Frankly, Sourav is one of the best cricketers India has produced and he did not need favours from Chappell to be part of the team”. Tendulkar also alleged that months before the 2007 World Cup, Chappell came to Tendulkar’s house and asked Tendulkar to take over India captaincy saying “together, we could control Indian cricket for years”.

Tendulkar’s allegations were supported by former teammates such as Zaheer Khan, Harbhajan Singh and V. V. S. Laxman. Zaheer called Chappell a “control freak” and said, “After he was appointed the coach of the Indian team, he once came upto me and told “Zaheer, you will not be playing for India till I remain the coach”. He also added that the two-year term under Chappell was “easily the worst and darkest phase” that he could remember. Harbhajan said, “Chappell destroyed Indian cricket to such an extent that it required at least 3 years to again get back on track. The worst part was some players in that team, who sucked upto the coach and would supply selective misinformation creating bigger rifts”. He also talked about the email leak, “Sourav was batting out there in the middle and this man was typing a critical e-mail against Sourav, sitting right there in that dressing room. He had no interest in the proceedings of the match. There were seven guys that he wanted to get rid of. Sourav was his primary target followed by myself, Virender Sehwag, Ashish Nehra, Zaheer Khan and Yuvraj Singh”. Laxman was also critical of Chappell in saying that Chappell took Indian cricket “backwards” during his coaching tenure. Laxman also recalled an incident from 2006, “This happened in 2006 at the Wankhede Stadium when India played versus England. Yuvraj Singh was picked ahead of me. We were going to the West Indies for a four-Test series after that and he asked me if I would open. I mentioned in 2000 I had decided I would not open anymore after it didn’t work for me in the first four years. I was consistent in the middle order since 2000. Chappell asked me my age and said – Don’t you think 31 is too young an age to sit at home? I was astonished to hear this. I had a very good run under him. I was the second highest run scorer under him.”