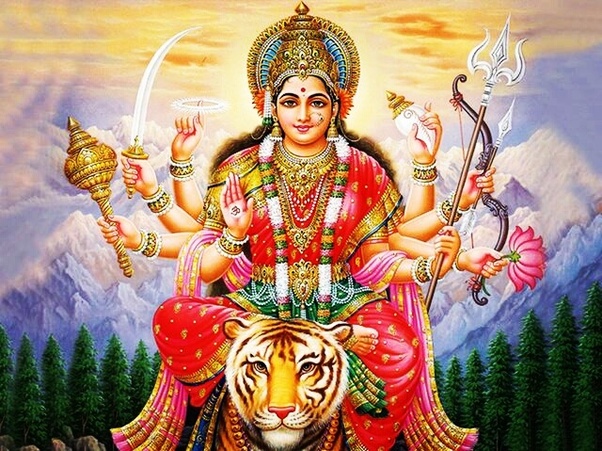 Maa Durga or Adi Parashakti or Maha Kali or Bhavani are the different names given to the same Divine Shakti. She is the consort of Shiv. Maa Durga represents Power or Shakti or Energy of the Universe. She is Prakriti or Mother Nature. She is depicted as female because in the natural world the female gives birth to her children and plays the role of a Mother. Maa Durga is Jagdamba or Mother of the whole universe. Shiv is the cosmos while Shakti is His Energy. She is the other half of Shiv, Ardhnareshwar. Maa Durga is depicted to have 8 or 10 arms, each hand carrying a weapon or sacred item. Her vaahan or vehicle is a Tiger or Lion. Tiger represents unlimited power while Lion represents beastly desires. Her riding on a lion depicts She has conquered all beastly desires. She is the force/ energy behind Kundalini, the dormant energy coiled like a serpent at the base of the spine of every human.

Maa Durga has 9 forms or avatars, known as NavDurga. She also has 10 other divine forms of Vidya or knowledge, known as Dus Mahavidyas. She in her Katyayani form (the 6th form in NavDurga) slayed the notorious and mighty buffalo demon Mahishasura. This earned her the famous epithet Mahishasura Mardini, meaning slayer of Mahishasura. 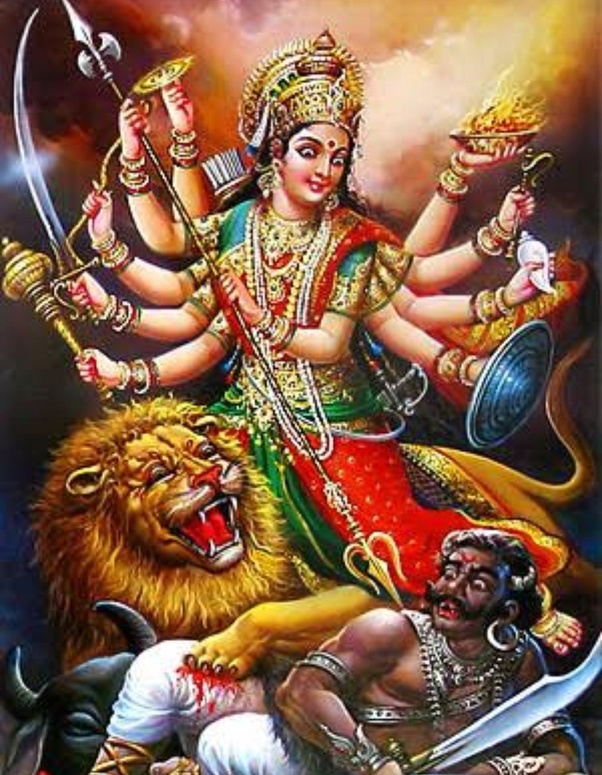 Mahishasura had obtained a boon from Lord Brahma after hard penance that no male God or Deva / deity no matter who it is can slay him. He misused this boon and conquered the Devloka or Kingdom of Gods and dethroned Indra from his reign. He created havoc in the three worlds. All the Devas went to the Trinity, Shiv, Vishnu, Brahma for help. The Trinity and other Devas combined their powers and gave them to Parvati, wife of Shiv. She then transformed into a form mightier than any God or Goddess. She transformed into Mother Durga. According to legends it is said that Maa Durga is not only the form that Parvati took after having received the combined powers from all Gods and The Trinity but that She is beyond everything, beyond all space and time. She is the Divine Source of Energy from which everything, including the Trinity Gods took birth. Her smile created the Universe and her Wrath can annihilate the Universe. She is the End and She is the Beginning. Hence the name Adi Parashakti. Maa Durga is one of the original manifested forms of Adi Parashakti, the others being Sati and Lalita Tripura Sundari.

Maa Durga slayed the wicked demons Shumbh and Nishumbh and Chand and Mund in her Kali or Maha Kali form. Her skin turned black and tongue turned blood red. She wore a garland of severed heads and skulls of demons that She slayed. Once after slaying a wicked demon named Raktbeej (so named because this demon would replicate himself everywhere his blood fell), Maa Kali became so angry that She was about to destroy the whole Universe. To calm the situation, Lord Shiv laid Himself down on the ground before Her. Accidentally She stepped on Shiv’s body and this made Her feel a sense of shame (since Shiv is Her consort and She has nothing but pure love for Him). This made Her stick Her bloody red tongue out. 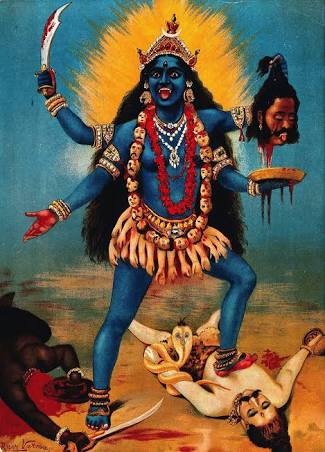 Maa Kali is supposed to represent the Raw power of Nature. She is linked with Dark Matter and Dark Energy, the energy that is currently one of the reasons of the continuous expansion of the Universe. Maa Maha Kali is one of the Ten Mahavidyas. She is beyond time and the consort of Mahakaal (one of the most powerful manifestations of Lord Shiv). Maa Kali emerges when Maa Durga turns wrathful. However beneath all the horror and rage is a Mother, is Mother Durga. 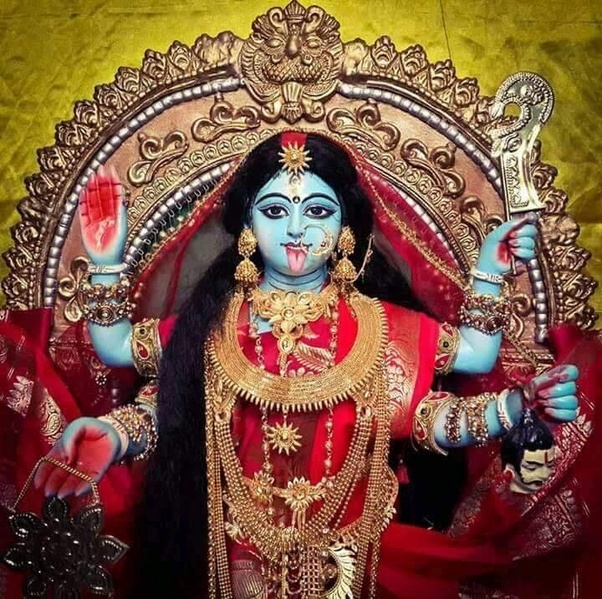 Maa Durga is often connected to Fire and also called Jwala or Jyotawali Maa (Mother of Divine Flame or Fire). As mentioned before, She is Mother Nature Herself. 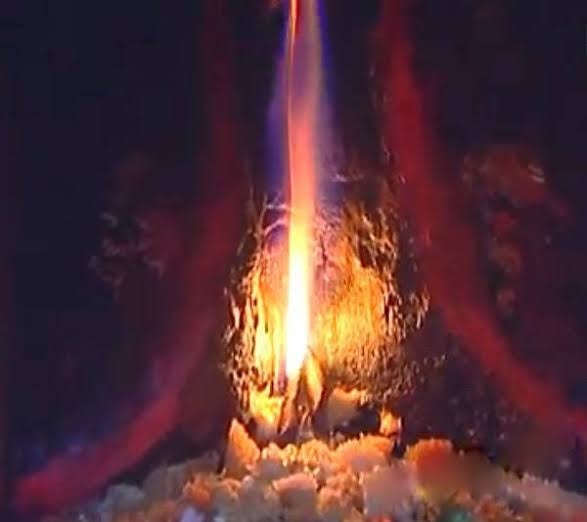 The Shaktipeeths are divine spots dedicated to Maa Durga. Sati immolated Herself when her father Daksha did not accept Her love for her husband Mahadev (Shiv). Shiv turned wrathful and lost all control. He carried Sati’s burned body around in the heavens. Nobody was able to console Him. Then Lord Vishnu with His Sudarshan Chakra tore Sati’s body into 51 different parts in order to calm Lord Shiv’s sorrow down. The 51 body parts fell at different places in Bharat. Those sites came to be known as Shaktipeeths.

One of the most famous powerful manifestations of Maa Durga is Maa Vaishno Devi. 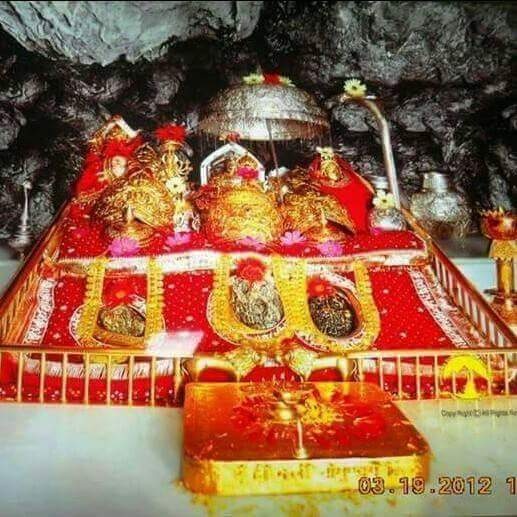 Maa Durga is beyond all explanation. She is Karma. She is Mahamaya (the great illusion). She is Moksha (enlightenment). You need to feel Her power, Her Divine Love by being not only Her devotee but Her Divine child. Have faith in Her like you have faith in your Mother. Mother’s love surpasses every hate, everything negative.

I tried my best to explain you as much in general as I can. However there is much more. Navdurga and Mahavidyas are basically forms of Maa Durga. However each form has a Divine cause of its own. You can read about it if you want to.

May Maa Durga drive out the darkness from our lives and lead us to The Truth. To Moksha. Sab moh maya hai. Jai Mata Di.