Those who don’t know, Gandhara was one of the 16 Mahajanapadas (kingdoms) of Ancient India. According to Zoroastrian Avesta, it is being described as 6th most beautiful place on earth.

Gandhara was known in Sanskrit as गन्धार gandhāra, in Avestan as Vaēkərəta, in Old Persian as Gadāra (Old Persian cuneiform: , Gadāra, also transliterated as Gandāra since the nasal “n” before consonants was omitted in the Old Persian script, and simplified as Gandara) in Babylonianand Elamite as Paruparaesanna (Para-upari-sena), in Chinese as T: 犍陀羅/S: 犍陀罗 (Qiántuóluó), and in Greek as Γανδάρα (Gandhara).

One proposed origin of the name is from the Sanskrit word गन्ध gandha, meaning “perfume” and “referring to the spices and aromatic herbs which they [the inhabitants] traded and with which they anointed themselves.

According to Mahabharata, Gandhari was born as the daughter of Subala, king of Gandhara and was named ‘Gandhari’ by her father.

People of Gandhara are described as a tribe in Hindu texts i.e Rigveda, Arthveda and later in Vedic textures. 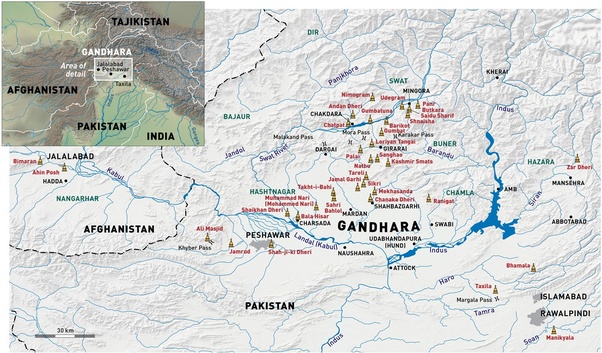 It is believed that stone tools and burnt bones were found in Mardan area caves which indicates this civilization was existed at the time of stoneage.

The name of the Gandhāris is attested in the Rigveda (RV 1.126.7 ). The Gandhāris, along with the Balhikas (Bactrians), Mūjavants, Angas, and the Magadhas, are also mentioned in the Atharvaveda (AV 5.22.14), as distant people. Gandharas are included in the Uttarapatha division of Puranic and Buddhistic traditions. The Aitareya Brahmana refers to King Nagnajit of Gandhara who was a contemporary of Janaka, king of Videha.

Between 525 to 320 BC, Gandhara was part of Persian Achaemenid empire. When Alexander invaded India in 320 BC, he defeated Persians and conquered the Peshawar Valley (it was Purushpura in Ancient India). It became part of Greek empire.

After Alexander, Chandragupta Maurya conquered northwest parts of Ancient India and included Gandhara in his territory. During his time Taxila became capital of Gandhara civilization and important center of Hinduism and Jainism. Taxila University is privileged to have the likes of teachers like Chanakya who became mentor of both Chandragupta and his son Bindusara. As Ashoka embraced Buddhism thus he later used his influence to spread teachings of Buddhism in rest part of India notably in Northwest Pakistan and Afghanistan. I wouldn’t be wrong to say Gandhara Valley well versed during Mauryan era where many stupas and Buddha’s statue were built. 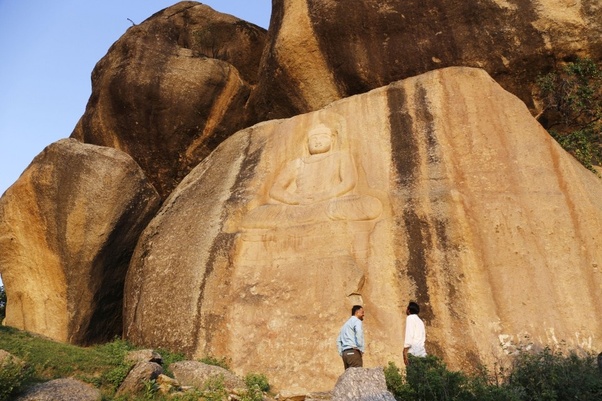 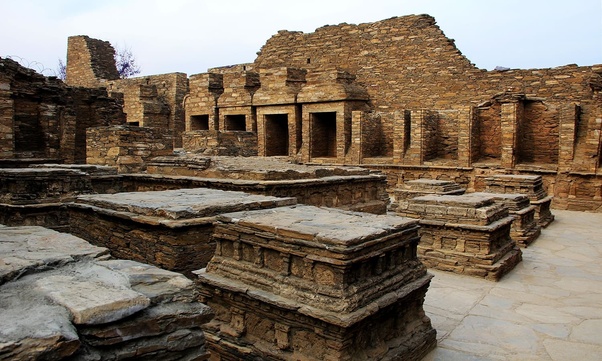 After fall of Maurya empire, Gandhara Civilization became tug of war between Persians, Greeks and Indian Monarchs. But Later Kanishka the Great of Kushan Empire brought back the glory days. 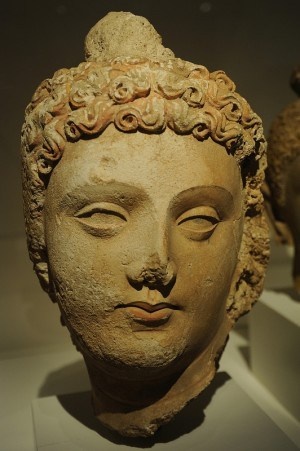 Kanishka’s empire was certainly vast. It extended from southern Uzbekistan and Tajikistan, north of the Amu Darya (Oxus) in the north west to Pakistan and Northern India, as far as Mathura in the south east (the Rabatak inscription even claims he held Pataliputra and Sri Champa), and his territory also included Kashmir, where there was a town Kanishkapur, named after him not far from the Baramula Pass and which still contains the base of a large stupa.

A 13 ft tall Kanishka Tower was built in the hub of Peshawar Valley. It was nicely explained by Buddhist Monk.

In the 400s CE, the Chinese Buddhist pilgrim Faxian visited the structure and described it as “the highest of all the towers” in the “terrestrial world”, which ancient travelers claimed was up to 560 feet (170 m) tall, though modern estimates suggest a height of 400 feet (120 m).

Jayapala was the last great king of this dynasty. His empire extended from west of Kabul to the river Sutlej. However, this expansion of Gandhara kingdom coincided with the rise of the powerful Ghaznavid Empire under Sabuktigin. Defeated twice by Sabuktigin and then by Mahmud of Ghazniin the Kabul valley, Jayapala gave his life on a funeral pyre. Anandapala, a son of Jayapala, moved his capital near Nandana in the Salt Range. In 1021 the last king of this dynasty, Trilochanapala, was assassinated by his own troops which spelled the end of Gandhara. Subsequently, some Shahi princes moved to Kashmir and became active in local politics.

The city of Kandahar in Afghanistan is said to have been named after Gandhara. According to H.W. Bellow, an emigrant from Gandhara in the 5th century brought this name to modern Kandahar. Faxian reported that the Buddha’s alms-bowl existed in Peshawar Valley when he visited around 400 (chapter XII). In 1872 Bellow saw this huge begging bowl (seven feet in diameter) preserved in the shrine of Sultan Wais outside Kandahar. When Olaf Caroe wrote his book in 1958 (Caroe, pp. 170–171), this relic was reported to be at Kabul Museum. The present status of this bowl is unknown.

The fall of Gandhara was fall of Buddhism in Ancient India. Since then Buddhism never revived however it continued to spread in Southeast Asia. After the conquest of Persia, Afghanistan and Northern parts of Pakistan, majority of Buddhists embraced Islam.

Taliban destroyed many historical sites of Gandhara Valley Civilization notably Bamyan’s Buddha Statue and one in Swat Valley which is great loss of our prestige history. Both govt of Afghanistan and Pakistan should do their best to protect these sites.

The subject of Gandhara Valley Civilization is so big that it requires more time and space. I respect the time of readers so I will cover remaining stuff some other day.

There is very strong legacy of Buddhism in Pakistan. If our govt pay little attention, they can earn million rupees by promoting religious tourism. I’m sure there are many history enthusiast in India and rest part of the world who are eager to visit these sites.

Muhammad Aamir Khokhar’s answer to Who is the most underrated historical figure from ancient India, according to you?