Most of us might have heard of Vedas being the foundation of Hinduism.

Which is but just partially correct, since the word ‘Hindu’ finds no mention in the Vedas, Upanishads or even the epics of Ramayan and Mahabharata. The word ‘Hindu’ most likely is of persian/arabic origin and was used to signify people living on the eastern banks of river Sindhu (The Indus river today) – making Hindu more of a geographical marker.

Most of us might know that Vedas are actually 4 books, the Rig Veda, Yajur Veda, Sama Veda, and Atharva Veda, but It is really hard to buy these even in India, and most people you meet, who speak about it, most likely have never even read a single chapter from it. Why do they show witnesses in movies swearing to Shreemad Bhagavad Geeta and not on the Vedas if they are so central to the religion?

Some might have heard, that Vedas are actually nothing but collection of some nice poems about rivers and lands. Some call it a collection of stupid old rituals. Some speak about it having words with multiple interpretations, having secret and hidden meanings, which may sound super awesome. But, what is it really? What kind of a god do they talk about?

Some call it Apaurusheya which primarily means, of super human origin. Many call it Shruti, which means something passed on from a teacher to a student by speaking or word-of-mouth. Most agree, though, that these books are really old – perhaps the oldest surviving books known to mankind. But then again, what the heck are they all about?

What are Vedas and what do they really contain?

Around 9500 BC, after the ancient men had figured agriculture, securing food needs – they steered their energies to the investigation of nature around them and the skies above. They were afraid of lightning. Unsure about the clouds and terrified of the floods. They desperately needed to control it all – even if it meant cajoling and appeasing these forces through hymns and poems.

Their attempts to understand the forces of nature, lead them to personify it. And thus were born the gods and demigods of fire, wind and sun among others in each and every old civilisation.

These personifications were needed to be pleased – which gave birth to rituals.

There was also a need felt for people to not kill, steal or fornicate unjustly – which was solved with the introduction of a codified law of ideal conduct.

All of this, together, gave birth to religion. And all the central books on religion thus cater to these needs and utilities in the following manner.

The 4 Vedas, the central books of Hinduism, have an extra 3rd deck of hands – perhaps the reason, why the religion has survived while the others gave way to newer updates. 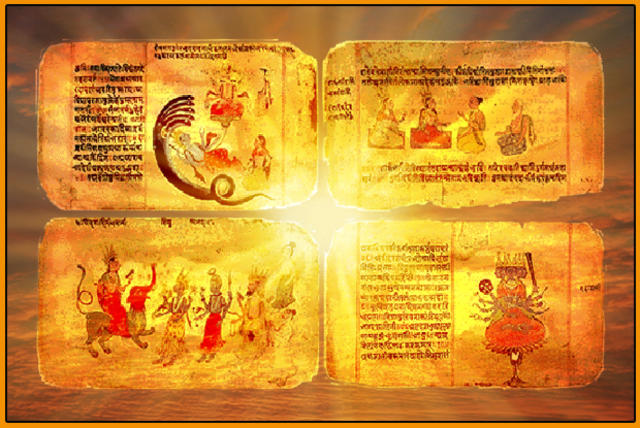 Vedas, which literally means knowledge in Sanskrit are basically a large body of ancient Indian knowledge. It has some seemingly boring poems and hymns about nature and also some interesting treatise of ancient medicine, architecture and alchemy.

All the 4 vedas have three parts.

The first part of the Vedas, known as Samhitas are basically a collection of hymns which are nothing but a human attempt to strike a friendship or relationship with the forces of nature. We hear them most often in the form of the Mantras recited during the rituals.

The second part of the vedas comprises of liturgy or Karmakanda or elaborate rituals knowns as Brahmanas. Which hand should you use while throwing ghee in the fire, measurement of the altar and other such details.

Sounds all superficial so far, like a text book on how to become a temple priest – ha ha 🙂

The third part of the Vedas are called the Aranyakas (from the jungles) or the Upanishads – which are basically a set of knowledge and discovery, the ancient Indians had while doing meditation in deep jungles – this, is what forms the throbbing and exciting core of Hinduism (Sanatan Vedic Dharma) as we know it.

This is what makes the vedas and thus Hinduism exciting. It does not claim to put the worldly knowledge to the follower on a platter, it instead makes one do something, which is considered a taboo in every other religion – It makes you question.

The literal meaning of Upanishads can be devious – Upa (to come near) + Nishada (To destroy). Is it calling me near to destroy me? Ha Ha 🙂

No such luck though, what it really means is to come near a source of learning and destroy the assumptions, delusions and half baked truths about the nature of reality through questioning. You need not be a rishi. You need not be an erudite scholar – the only qualification it seeks is inquisitiveness.

There are more than 108 Upanishads. Some of these upanishads are tiny (12 verses) and some are huge. Experts though consider 10–12 of them to be central.

They are all available in almost all major languages and anyone interested in taking a philosophical journey of self awareness should give it a peek.

Be it a devout religious person, and an atheist, Upanishads absolutely do not discriminate or proselytise. Think of this an old bestseller in the self help section of the bookstore of life. There’s something to chew for everyone – here’s my favorite example from Yajurveda – Brihadaranyaka Upanishad, Hymns 4.4.5-4.4.6:

Now as a man is like this or like that,
according as he acts and according as he behaves, so will he be;
a man of good acts will become good, a man of bad acts, bad;
he became pure by pure deeds, bad by bad deeds;