Why it was incorporated

First, why was Article 370 inserted in the Constitution? Or as the great poet and thinker, Maulana Hasrat Mohini, asked in the Constituent Assembly on October 17, 1949: “Why this discrimination please?” The answer was given by Nehru’s confidant, the wise but misunderstood Thanjavur Brahmin, Gopalaswami Ayyangar (Minister without portfolio in the first Union Cabinet, a former Diwan to Maharajah Hari Singh of Jammu and Kashmir, and the principal drafter of Article 370). Ayyangar argued that for a variety of reasons Kashmir, unlike other princely states, was not yet ripe for integration. India had been at war with Pakistan over Jammu and Kashmir and while there was a ceasefire, the conditions were still“unusual and abnormal.” Part of the State’s territory was in the hands of “rebels and enemies.”

The involvement of the United Nations brought an international dimension to this conflict, an “entanglement” which would end only when the “Kashmir problem is satisfactorily resolved.” Finally, Ayyangar argued that the “will of the people through the instrument of the [J&K] Constituent Assembly will determine the constitution of the State as well as the sphere of Union jurisdiction over the State.” In sum, there was hope that J&K would one day integrate like other States of the Union (hence the use of the term “temporary provisions” in the title of the Article), but this could happen only when there was real peace and only when the people of the State acquiesced to such an arrangement.
Second, did Sardar Vallabhbhai Patel oppose Article 370? To reduce the Nehru-Patel relationship to Manichean terms is to caricature history, and this is equally true of their attitude towards Jammu and Kashmir. Nehru was undoubtedly idealistic and romantic about Kashmir.

He wrote: “Like some supremely beautiful woman, whose beauty is almost impersonal and above human desire, such was Kashmir in all its feminine beauty of river and valley…”

Patel had a much more earthy and pragmatic view and — as his masterly integration of princely states demonstrated — little time for capricious state leaders or their separatist tendencies.
But while Ayyangar negotiated — with Nehru’s backing — the substance and scope of Article 370 with Sheikh Abdullah and other members from J&K in the Constituent Assembly (including Mirza Afzal Beg and Maulana Masoodi), Patel was very much in the loop. And while Patel was deeply sceptical of a “state becoming part of India” and not “recognising … [India’s] fundamental rights and directive principles of State policy,” he was aware of, and a party to, the final outcome on Article 370.

Indeed, the synergy that Patel and Nehru brought to governing India is evident in the negotiations over Article 370. Consider this. In October 1949, there was a tense standoff between Sheikh Abdullah and Ayyangar over parts of Article 370 (or Article 306A as it was known during the drafting stage). Nehru was in the United States, where — addressing members of the U.S. Congress — he said: “Where freedom is menaced or justice threatened or where aggression takes place, we cannot be and shall not be neutral.” Meanwhile, Ayyangar was struggling with the Sheikh, and later even threatened to resign from the Constituent Assembly. “You have left me even more distressed than I have been since I received your last letter … I feel weighted with the responsibility of finding a solution for the difficulties that, after Panditji left for America … have been created … without adequate excuse,” he wrote to the Sheikh on October 15. And who did Ayyangar turn to, in this crisis with the Sheikh, while Nehru was abroad? None other than the Sardar himself. Patel, of course, was not enamoured by the Sheikh, who he thought kept changing course. He wrote to Ayyangar: “Whenever Sheikh Sahib wishes to back out, he always confronts us with his duty to the people.” But it was Patel finally who managed the crisis and navigated most of the amendments sought of the Sheikh through the Congress party and the Constituent Assembly to ensure that Article 370 became part of the Indian Constitution.

Third, is Article 370 still intact in its original form? One of the biggest myths is the belief that the “autonomy” as envisaged in the Constituent Assembly is intact. A series of Presidential Orders has eroded Article 370 substantially. While the 1950 Presidential Order and the Delhi Agreement of 1952 defined the scope and substance of the relationship between the Centre and the State with the support of the Sheikh, the subsequent series of Presidential Orders have made most Union laws applicable to the State. In fact today the autonomy enjoyed by the State is a shadow of its former self, and there is virtually no institution of the Republic of India that does not include J&K within its scope and jurisdiction. The only substantial differences from many other States relate to permanent residents and their rights; the non-applicability of Emergency provisions on the grounds of “internal disturbance” without the concurrence of the State; and the name and boundaries of the State, which cannot be altered without the consent of its legislature. Remember J&K is not unique; there are special provisions for several States which are listed in Article 371 and Articles 371-A to 371-I. 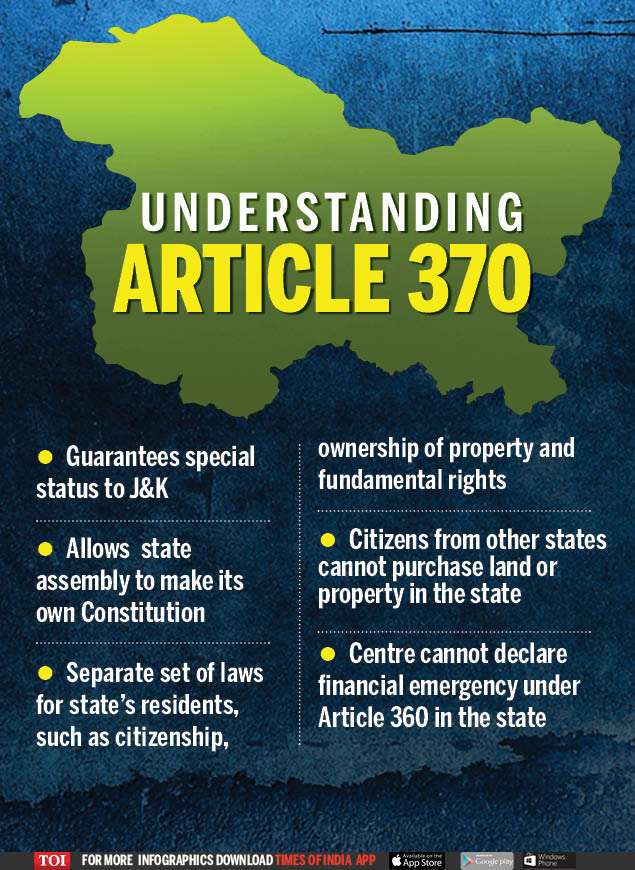 Fourth, can Article 370 be revoked unilaterally? Clause 3 of Article 370 is clear. The President may, by public notification, declare that this Article shall cease to be operative but only on the recommendation of the Constituent Assembly of the State. In other words, Article 370 can be revoked only if a new Constituent Assembly of Jammu and Kashmir is convened and is willing to recommend its revocation. Of course, Parliament has the power to amend the Constitution to change this provision. But this could be subject to a judicial review which may find that this clause is a basic feature of the relationship between the State and the Centre and cannot, therefore, be amended. 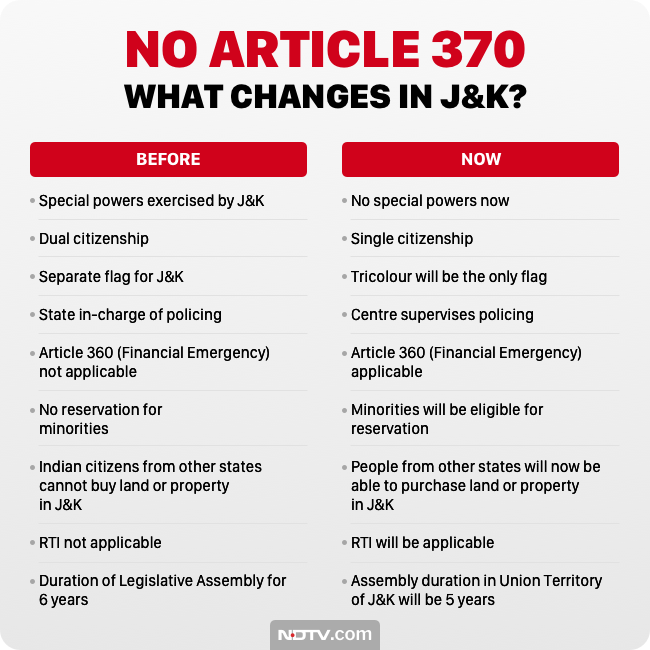 Fifth, is Article 370 a source of gender bias in disqualifying women from the State of property rights? Article 370 itself is gender neutral, but the definition of Permanent Residents in the State Constitution — based on the notifications issued in April 1927 and June 1932 during the Maharajah’s rule — was thought to be discriminatory. The 1927 notification included an explanatory note which said: “The wife or a widow of the State Subject … shall acquire the status of her husband as State Subject of the same Class as her Husband, so long as she resides in the State and does not leave the State for permanent residence outside the State.” This was widely interpreted as suggesting also that a woman from the State who marries outside the State would lose her status as a State subject. However, in a landmark judgement, in October 2002, the full bench of J&K High Court, with one judge dissenting, held that the daughter of a permanent resident of the State will not lose her permanent resident status on marrying a person who is not a permanent resident, and will enjoy all rights, including property rights.

Finally, has Article 370 strengthened separatist tendencies in J&K? Article 370 was and is about providing space, in matters of governance, to the people of a State who felt deeply vulnerable about their identity and insecure about the future. It was about empowering people, making people feel that they belong, and about increasing the accountability of public institutions and services. Article 370 is synonymous with decentralisation and devolution of power, phrases that have been on the charter of virtually every political party in India. There is no contradiction between wanting J&K to be part of the national mainstream and the State’s desire for self-governance as envisioned in the Article.

Separatism grows when people feel disconnected from the structures of power and the process of policy formulation; in contrast, devolution ensures popular participation in the running of the polity. It can be reasonably argued that it is the erosion of Article 370 and not its creation which has aggravated separatist tendencies in the State. Not surprisingly, at the opposition conclave in Srinagar in 1982, leaders of virtually all national parties, including past and present allies of the BJP, declared that the “special constitutional status of J&K under Article 370 should be preserved and protected in letter and spirit.” A review of its policy on Article 370, through an informed debate, would align today’s BJP with the considered and reflective approach on J&K articulated by former Prime Minister Atal Bihari Vajpayee. Only then would the slogans of Jhumuriyat, Kashmiriyat and Insaniyat make real sense.