Is man on the threshold of a new world or merely stuck on a circular treadmill repeating the doomed lessons from history which he never seems to learn? A growing number of scholars believe the world’s macabre fascination with nuclear war is just the latest repeat in a series of blunders human technology seems obsessed with repeating.

Ancient tales speak of flying vimanas. Vimanas were real vehicles and the origin of the ‘Aeroplanes.’ Great wars were described in early religious texts. Weapons could literally level the land like a moving force field. In ancient India, we find words for certain measurements of length; one was the distance of light-years and one was the length of an atom. Only a society that possessed nuclear energy would have the need for such words.

Consider these verses from the ancient Mahabharata:

…a single projectile
Charged with all the power of the Universe.
An incandescent column of smoke and flame
As bright as the thousand suns
Rose in all its splendour…
a perpendicular explosion
with its billowing smoke clouds…
…the cloud of smoke
rising after its first explosion
formed into expanding round circles
like the opening of giant parasols…
..it was an unknown weapon,
An iron thunderbolt,
A gigantic messenger of death,
Which reduced to ashes
The entire race of the Vrishnis and the Andhakas.
…The corpses were so burned
As to be unrecognisable.
The hair and nails fell out;
Pottery broke without apparent cause,
And the birds turned white.
After a few hours
All foodstuffs were infected…
…to escape from this fire
The soldiers threw themselves in streams
To wash themselves and their equipment.

Until the bombing of Hiroshima and Nagasaki, modern mankind could not imagine any weapon as horrible and devastating as those described in the ancient Indian texts. Yet, they very accurately described the effects of an atomic explosion. Radioactive poisoning will make hair and nails fall out. Immersing oneself in water gives some respite, though it is not a cure.

When excavations of Harappa and Mohenjo-Daro reached the street level, they discovered skeletons scattered about the cities, many holding hands and sprawling in the streets as if some instant, horrible doom had taken place. People were just lying, unburied, in the streets of the city. Excavations down to the street level revealed 44 scattered skeletons, as if doom had come so suddenly they could not get to their houses. All the skeletons were flattened to the ground. A father, mother and child were found flattened in the street, face down and still holding hands. And these skeletons are thousands of years old, even by traditional archaeological standards. What could cause such a thing? Why did the bodies not decay or get eaten by wild animals? Furthermore, there is no apparent cause of a physically violent death.

These skeletons are among the most radioactive ever found, on par with those at Hiroshima and Nagasaki. At one site, Soviet scholars found a skeleton which had a radioactive level 50 times greater than normal. Other cities have been found in northern India that show indications of explosions of great magnitude. One such city, found between the Ganges and the mountains of Rajmahal, seems to have been subjected to intense heat. Huge masses of walls and foundations of the ancient city are fused together, literally vitrified! And since there is no indication of a volcanic eruption at Mohenjo-Daro or at the other cities, the intense heat to melt clay vessels can only be explained by an atomic blast or some other unknown weapon. The cities were wiped out entirely. 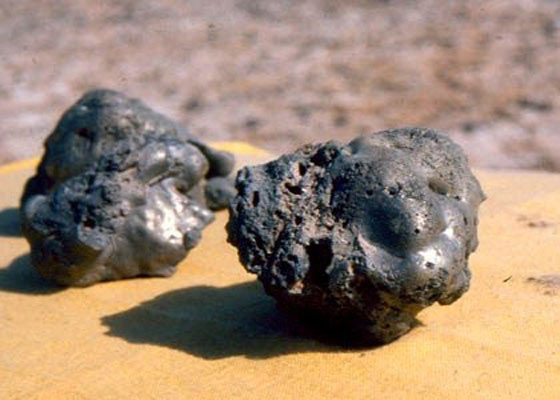 There is evidence that the Rama empire was devastated by nuclear war. The Indus valley is now the Thar desert, and the site of the radioactive ash found west of Jodhpur is around there. A heavy layer of radioactive ash in Rajasthan, India, covers a three-square mile area, ten miles west of Jodhpur. Scientists are investigating the site, where a housing development was being built. For some time it has been established that there is a very high rate of birth defects and cancer in the area under construction. The levels of radiation there have registered so high on investigators’ gauges that the Indian government has now cordoned off the region. Scientists have unearthed an ancient city where evidence shows an atomic blast dating back thousands of years, from 8,000 to 12,000 years, destroyed most of the buildings and probably a half-million people. One researcher estimates that the nuclear bomb used was about the size of the ones dropped on Japan in 1945.

Another curious sign of an ancient nuclear war in India is a giant crater near Mumbai. The nearly circular 2,154-metre-diameter Lonar crater, located 400 kilometres northeast of Mumbai and aged at less than 50,000 years old, could be related to nuclear warfare of antiquity. No trace of any meteoric material, etc., has been found at the site or in the vicinity, and this is the world’s only known “impact” crater in basalt. Indications of great shock (from a pressure exceeding 600,000 atmospheres) and intense, abrupt heat (indicated by basalt glass spherules) can be ascertained from the site.

Interestingly, Manhattan Project chief scientist Dr J. Robert Oppenheimer was known to be familiar with ancient Sanskrit literature. In an interview conducted after he watched the first atomic test, he quoted from the Bhagavad Gita: “Now I am become Death, the Destroyer of Worlds.”

When asked in an interview at Rochester University seven years after the Alamogordo nuclear test whether that was the first atomic bomb ever to be detonated, his reply was, “Ancient cities whose brick and stonewalls have literally been vitrified, that is, fused together, can be found in India, Ireland, Scotland, France, Turkey and other places. There is no logical explanation for the vitrification of stone forts and cities, except from an atomic blast.”

Historian Kisari Mohan Ganguli says that Indian sacred writings are full of such descriptions, which sound like an atomic blast as experienced in Hiroshima and Nagasaki. He says references mention fighting sky chariots and final weapons. An ancient battle is described in the Drona Parva, a section of the Mahabharata. “The passage tells of combat where explosions of final weapons decimate entire armies, causing crowds of warriors with steeds and elephants and weapons to be carried away as if they were dry leaves of trees,” says Ganguli.

“Instead of mushroom clouds, the writer describes a perpendicular explosion with its billowing smoke clouds as consecutive openings of giant parasols. There are comments about the contamination of food and people’s hair falling out.”

“It’s so mid-boggling to imagine that some civilization had nuclear technology before we did. The radioactive ash adds credibility to the ancient Indian records that describe atomic warfare.”