Naaga Sadhus generally live in some caves of hills and big mountains. Naga Sadhus are in fact our protectors. yes, they are the armed army of Sanatan Vedic Dharm, which hardly anyone is aware of the fact of Naga.

Naga Sadhus are always astonishing to see them, because, they are always nude. Naga Sadhus are generally seen in Ardhkumbh, Mahakumbh or Shinastha Kumbh. They are nude for two reasons- One is for his total Sanyas from material world and desire and second is they are ful fleged army— no matter of cloths, food, water or any other things.

History of Nagas- The founding of the Present form of Sanatan Vedic Dharm was laid by Adi Guru Shankaracharya. During the time of Shankaracharya, Muslim invaders and robbers were infiltrating into Indian land secretly or in some groups. They had looted our thousands of temples and demolished also.

In course of protect them, Adi Guru Shankaracharya established the Akhand Bharat in the name of armed forces and branches of various sects of Sanatan Vedic Dharm. These armed forces of Sanatan Dharm were used in Akhara and Ashram and some important big temples- aiming to protect them and even common civilians from the Islamic invasions and attacks. These naga Sadhus were taught the weapons and other arms to protect Sanatan vedic Dharm. Naga Sadhus were generally aware of using weapons. 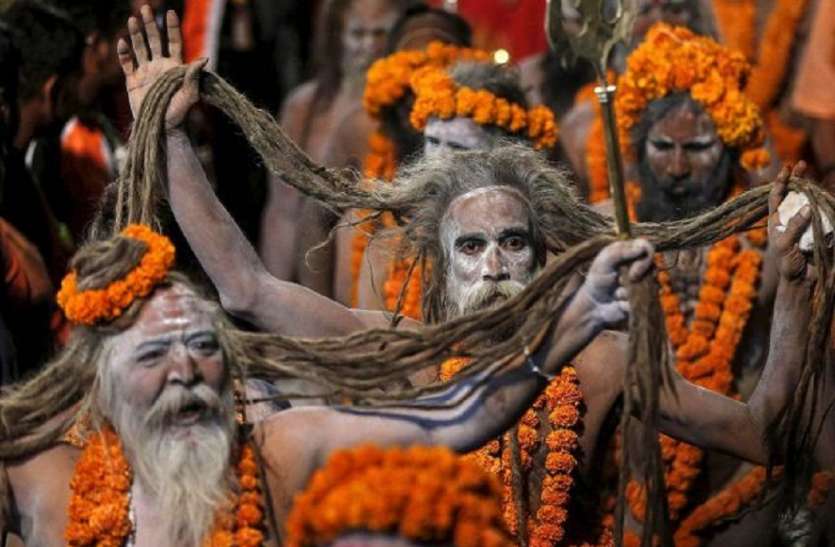 Naga and War- Naga Sadhu have fought many Dharmic wars also for the society in the history. More than 40 Thousands of Nagas took part in the work of protections of Sanatan Vedic Dharm. In course of war for Dharm by Islamic invaders, they got several time assistances and support by the local region Kings and Mahraaj. The Most prominent war of Naga Sadhu was the firece battle between Naga and Ahmad Shah Abdali.

Naga Sadhus are generally connected to some particular orchard, Ashram, Akhada or temples. They frequent visit those sites with their groups. They can visit and present any moment, they like. But some Naga Sadhus prefer to live in hill area or some even go to Himalaya regions or some caves for asceticism. These Naga Sadhus prefer to march the pedstrain and they are in fact, the army of Sanatan Vedic Dharm. We all should respect and value them heartly.

It will remain a mystery forever though,how can they gather in such large numbers during Kumbh or Mahakumbh Mela but right after the end of the event they just disappear and never seen again until the next time.