The word “Mahajanapadas” is combination of two words where “Maha” means great and “Janapada” means foothold of a tribe. After the demise of both Indus Valley Civilizations and Vedic era, their legacy later spread in Northwest parts of Ancient areas. It is worth mentioning that both Jainism and Buddhism founded during Mahajanapadas era.

This process of first settlement on land had completed its final stage prior to the times of the Buddha and Pāṇini. The Pre-Buddhist north-west region of the Indian sub-continent was divided into several Janapadas demarcated from each other by boundaries. In Pāṇini’s “Ashtadhyayi”, Janapada stands for country and Janapadin for its citizenry. Each of these Janapadas was named after the Kshatriya tribe (or the Kshatriya Jana) who had settled therein. Buddhist and other texts only incidentally refer to sixteen great nations (Solasa Mahajanapadas) which were in existence before the time of the Buddha.

These Mahajanapadas were founded mostly in the Northwest areas. These areas were fertile for agriculture and thus became populated. This map might help you to understand it conveniently. 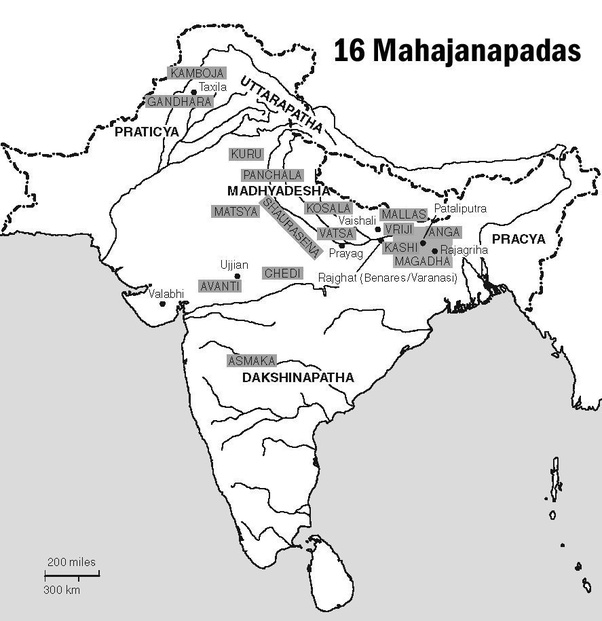 If you look at the pattern of these states, most of them were at the banks of River Ganga, River Jamna and Northwest rivers of Punjab including River Sindh.

Kashi can be considered amongst one of the oldest Mahajanapada and holiest place of Hinduism. Located at the banks of Ganga and Gomti rivers. Banaras (Varansi) was the capital city.

Kosala was located in the Eastern Uttar Pradesh with Shravasti as its capital. It was bordered with River Gomti on the west, River Sadaniva. In modern context it includes districts like Faizabad, Gonda and Bhahraich.

In earlier years it was sovereign state with Champa as its capital. It was later merged with Magadha dynasty.

One of the most prestigious and oldest Mahajanapadas. In modern contexts it covers Patna, Gaya and Shahabad of Bihar. Later Magadha spread in Northwest part of Ancient and all other Mahajanapadas subsequently became part of it.

It was located near banks of River Ganga in Bihar and separated from Kosala. It was home of 8 major tribes notably Lichhavais, Janatriks andVidehas.

It covers areas of Deoria, Basti, Gorakhpur in Eastern Uttar Pradesh with Khushinagar as its Capital.

It was at banks of south of river Yamuna and along river Betwa or Vetravati. Suktimati or Sotthivati was its capital city.

It was located at modern districts of districts of Allahabad and Mirzapur in Uttar Pradesh with Kausambi as its capital.

It was located on areas of Alwar, Bharatpur, Jaipur districts of Rajasthan with Viratnagar as its capital.

It was surrounded mainly at junction of Uttarpatha and Dakshinpatha. Mathura was the capital city.

It was the only Mahajanapadas in the down west of India. It was located near Nandura Tehsil, Buldana district in the Indian state of Maharashtra. Potali, Potana or Podana was capital city.

It was located near Hindukush mountains of Kashmir (modern day Pakistan). Rajpur was the capital city.

One of the oldest and prestigious civilization of Ancient India. It was located between covered regions of Kabul and Rawalipindi. Kabul, Jalalaabad, Purushpura (now Peshawar), Pushkalavati (now Charsadda). Taxila (now small town in Rawalpindi) was the capital city. Father of Sanskrit grammar rules, Panini was born in Pushkalavati.

It is understood both Prakrit and Sanskrit were widely spoken languages of these 16 Mahajanapadas . Languages like Pahari, Rajhastani, Sindhi, Punjabi, Haryanvi, Bhojpuri, Hindi-Urdu (Hindustani language) got their major influences from Prakrit and Sanskrit. At the end of Vedic period, Jainism and Buddhism came into being which were extensions of Hinduism. Later years Chandragupta Maurya and Ashoka merged all these Mahajanapadas into one single state where Magadha and Gandhara were at their peak.