1. Pradyumna was the son of Lord Krishna and Rukmini.

2. He was the eldest among all the sons of Lord Krishna.

3. It is said that Pradyumna was very handsome and possessed the beauty of Kamadeva.

4. On the seventh day after Pradyumna’s birth, a demon named Kalashambara stole him from the chamber of Rukmini.

6. Meanwhile at Dwarka, Rukmini was mad with grief. Lord Krishna consoled her and told that everything was under the subjugation of destiny and he could do nothing about it. Lord Krishna, who could forsee the events of future, implied that Pradyumna would return to Dwarka someday. 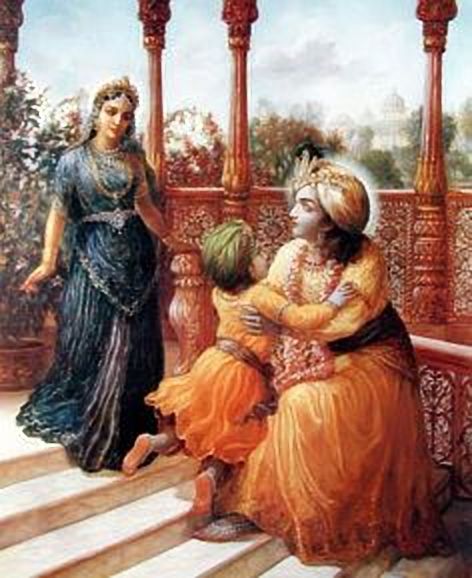 9. Taking Mayavati on a chariot, Pradyumna proceeded for the city of Dwarka. Reaching Dwarka, he entered the palace of Lord Krishna along with Mayavati. Lord Krishna and Rukmini discerned that Padyumna had returned and came out to meet their son.

10. Rukmini questioned the presence of Mayavati. Pradyumna mentioned Mayavati as his foster mother. However, Lord Krishna, who knew all the events of the past, smiled and told the unknown story of Mayavati. Lord Krishna told that Mayavati was the wife of Kamadeva. After Kamadeva was burnt to death by Lord Shiva, the demon Kalashambara abducted Mayavati from the house of Kamadeva. The demon ordered her to serve as his wife and threatened to kill her if she refused to do so.

11. Lord Krishna then smiled at Mayavati, whose eyes were filled with tears. He convinced her that Pradyumna was none other than Kamadeva, who reincarnated to rescue her from Kalashambara.

13. Pradyumna defeated Kartikeya in the city of Shonitpura.

14. Pradyumna fought a fierce battle with the Kuru warriors. He defeated the warriors Bhishma, Drona, Kripa, Karna, Vikarna and Duryodhana. Using his power of illusion, Pradyumna imprisoned them inside a secluded cave. Upon the request of Lord Krishna, Pradyumna released them from the cave.