On the request of the Supreme Court of India the seven member committee in the presence of the Head Trustee of Travencore Trust of Sri Anantha Padmanabha Swamy temple at Tiruvananthapur in Kerala have opened the six secret vaults.

They have discovered under 20 feet of the ground approximately $ 22 BILLION in the form of, diamond jewelry, golden utensils, weapons, golden idols, golden elephants idols and diamond necklaces having 500 kilograms weight and 18 feet length and bags full of golden coins of different nations, including NAPOLEON and ITALIAN coins in the last one week. With this Sri Anantha Padmanabha Swamy of Tiruvnanthapuram has emerged the richest God on the earth.

The temple management authorities were aware of the existence of six vaults. They are situated very close to the middle of the temple on its western side just below where the deity is placed.

For documentation purposes, these vaults have been designated as vaults A, B, C, D, E and F.

Subsequently, two more vaults have been identified and they have been designated as vaults G and H.

The main vault or the seventh vault is Vault B.

The mysterious door of Vault B

The entire world stands now to know whats behind that door. According to experts, the door was supposed to unlock by itself when a secret chant is spelled, as it is believed that the door is locked in that way

It is believed that this chamber is being consider as highly mysterious,sacred and risky by Trust members and other learned astrologers. The steel door of Chamber B is having two big COBRA PORTRAITS on it and this door has no nuts, bolts or even latches. It is just a plain chunk of steel 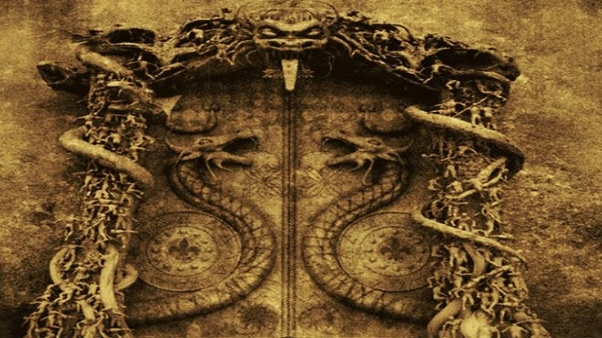 Stories hence abound of how the door is protected by the snake-god, and can only be opened by sadhus chanting the ‘Garuda Mantra’, the only hitch being there was no such siddhpurus in India. If the vault was opened using man-made techniques, it would lead to catastrophes, Hindu mythology experts had felt.

About a century ago, faced with a severe famine, temple officials had tried to break open the chamber, but stopped on hearing what sounded like rushing water. The story went on how the vault was connected to the Arabian Sea, and once it is opened, the sea would flood the entire city.

“’It is ideal that we keep the B vault locked. The treasures stored in that vault that is located below the deity’s head are protected by taming of micro-natural forces by tantric experts for ensuring its safe upkeep. If anyone dares to open that vault, it would trigger off a series of troubles”, Vaasthu expert K Muraleedharan Nair had then opined.

The Varmas, the former royal family of Travancore, have staunchly opposed opening vault B, citing fears it will disturb the temple’s spiritual energy, anger the deity and bring them ill fortune. “They believe death will visit them if vault B would be opened,” KK Venugopal, a family lawyer, told the judges during a Supreme Court hearing. “They are extremely concerned something may happen to them.”

As of now, people from other side could listen to the sounds of water or sounds made by snakes as guessed. Till date no one knows what exactly is behind the vault.