One of the ignored yet significant characters of the Epic, the Mahabharata (which is not mythology), he deserves more light on him, especially as Kunti’s dearest son and Draupadi’s loving husband. Extremely wise and knowledgeable, a disciple of Deva-Guru, Brihaspati, Sahadeva was an excellent swordsman as well. Though his twin Nakula was considered as the most handsome, Sahadeva was also unrivalled in beauty. He was the youngest of Madri’s twins. 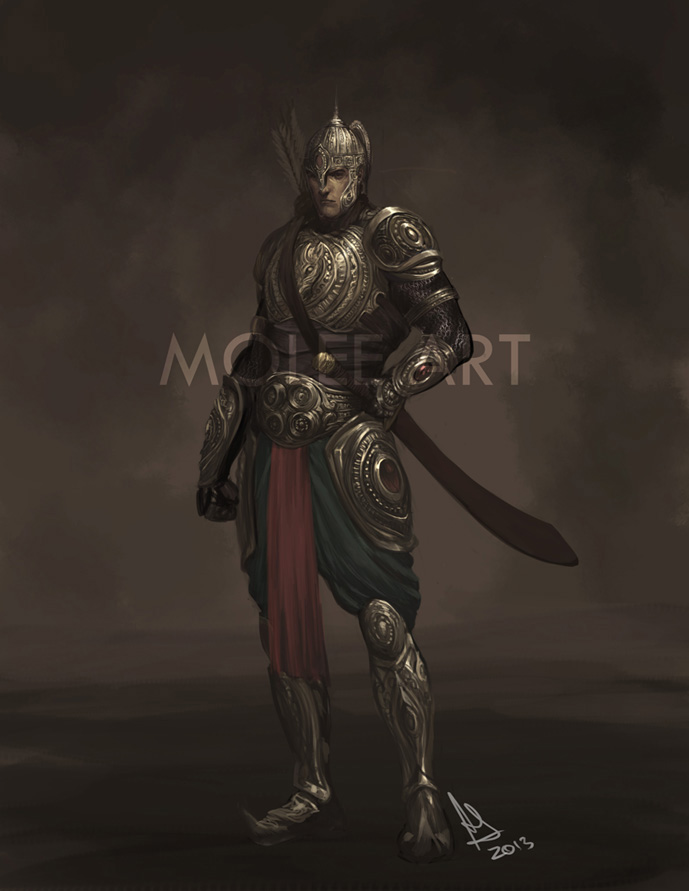 During the Rajasuya conquest, Sahadeva conquered the southern direction. The list of the kings whom he conquered with his valour:

He gratified Dwivida and Mainda, the Vanara-kings of Kishkindha, by fighting with them for a long time and earned their tribute. With his prayers to Agni, he brought under his sway the kingdom of Mahishmati, ruled by King Nila. He conquered Sanjayanti, Pashandas and Karahatakas by means of his messengers alone. Kuntibhoja, Rukmi and Vibhishana accepted his sway without any war.

Sahadeva was not the biological son of Kunti yet she loved him the most amongst all her sons, even though her relationship with Madri was not-so-great. Sahadeva too, loved Kunti as his own mother. They even had a similar thought-process. When the Pandavas visited Kunti in the forests in her last days, this was how Sahadeva reacted:

Pandavas beheld all of them from a distance. Desirous of meeting with their sire they walked with a rapid pace. Then Sahadeva ran with speed towards the spot where Pritha was. Touching the feet of his mother, he began to weep aloud. With tears gushing down her cheeks, she saw her darling child. Raising her son up and embracing him with her arms, she informed Gandhari of Sahadeva’s arrival.

Sahadeva was calm in general but when he spoke, he was straight-forward and to the point. That was his unique trait inspired by his unparalled wisdom, which makes him inspiring.

He loved and revered Krishna:

Sahadeva then answered (Sisupala) in words of grave import, saying,–‘If amongst ye there be any king that cannot bear to see Kesava of dark hue, the slayer of Kesi, the possessor of immeasurable energy, worshipped by me, this my foot is placed on the heads of all mighty ones (like him). When I say this, let that one give me an adequate reply. And let those kings that possess intelligence approve the worship of Krishna who is the preceptor, the father, the guru, and deserveth the Arghya and the worship (already offered unto him).’

“When Sahadeva thus showed his foot, no one among those intelligent and wise and proud and mighty monarchs said anything. And a shower of flowers fell on Sahadeva’s head, and an incorporeal voice said–‘Excellent, excellent.’

He had the courage to say this in front of all the assembled kings and no one spoke a word. Akaashavaani praised him and showered celestial flowers on him. For him, Krishna was: Father and preceptor. He was a devotee, brother, son-like and disciple-like to the Lord of the Universe Himself.

Sahadeva was made of courage and determination. When Jatasura carried away Yudhisthira, Nakula, Sahadeva and Draupadi in the absence of Bhima and Arjuna, he forcibly extricated himself:

‘What can be more meritorious for a Kshatriya than to fall in fight, or defeat a foe? O repressor of foes, we will fight and either this one will slay us, or we shall slay him, O mighty-armed one. Verily this is the place and time. O king. And, O thou of unfailing prowess, the time hath come for the display of our Kshatriya virtue. It behoveth us to attain heaven either by gaining victory or being slain. If the sun sets to-day, the Rakshasa living yet, O Bharata, I will not any more say that I am a Kshatriya. Ho! Ho! Rakshasa. say! I am Pandu’s son, Sahadeva. Either, after having killed me, carry off this lady, or being slain, lie senseless here.’

In Udyoga Parva, when everyone preferred peace, Sahadeva, Draupadi and Kunti wanted the war to happen. Draupadi demanded justice, Kunti asked her sons to complete their Kshatriya duties, while Sahadeva’s stance seemed exceptional to me, the only opinion Draupadi approved (also Satyaki, who had the same opinion):

Sahadeva said, ‘What hath been said by the king is, indeed, eternal virtue, but thou, O chastiser of foes, shouldst act, in such a way that war may certainly happen. Even if the Kauravas express their desire for peace with the Pandavas, still, O thou of Dasarha’s race, provoke thou a war with them. Having seen, O Krishna, the princess of Panchala brought in that plight into the midst of the assembly, how can my wrath be appeased without the slaughter of Suyodhana. If, O Krishna, Bhima and Arjuna and king Yudhishthira the just are disposed to be virtuous, abandoning virtue I desire an encounter with Duryodhana in battle.’

His emotions can be felt through these words. Note, saying that I’ll abandon virtue for my wife is not a random and common dialogue of that era. I wonder if anyone else had ever uttered anything like that. For this, Sahadeva stands exceptional and high. This was his uniqueness, just like every Pandava had their own unique traits. But, no reader of the Epic gives Sahadeva the honour he deserves, which saddens me deeply.

And taking her feet of red soles, bearing auspicious marks, the twins began to press them gently with their hands, scarred by the bow-string.

With his twin Nakula, Sahadeva pressed the feet of Draupadi when she fell unconscious due to fatigue. In the light of that era, it didn’t matter that he was a husband to her, it didn’t matter that a huge group of Brahmanas were present, what mattered to him was to care for his wife. I cannot imagine what he might have gone through in the Dyuta Sabha. His words themselves give me goosebumps. So his pain is beyond my imagination.

Following Bhima’s words, he took an oath to kill Shakuni. He fulfilled it in the war of Kurukshetra that ensued.

Endued with great energy of mind, Sahadeva, having afflicted his foe thus, addressed him, as if for calling back to mind (his past misdeeds), in these words, ‘Adhering to the duties of a Kshatriya, fight (with me) and be a man! Thou hadst, O fool, rejoiced greatly in the midst of the assembly, while gambling with dice! Receive now, O thou of wicked understanding, the fruit of that act! All those wicked-souled ones that had ridiculed us then have perished! Only that wretch of his race, Duryodhana, is still alive, and thyself, his maternal uncle! Today I shall slay thee, striking off thy head with a razor-headed arrow like a person plucking a fruit from a tree with a stick!”

He knew how to make peace. After Drona Vadha, Dhrishtadyumna and Satyaki were on the verge of killing each other, but Sahadeva’s wise words caught my attention:

Then Sahadeva, O king, jumping down from his own car, addressed Satyaki, thus held fast by the strong arms of Bhima, in these words, ‘O tiger among men, O thou of Madhu’s race, we have no friends dearer to us than the Andhakas, the Vrishnis and the Panchalas. So also the Andhakas and the Vrishnis, particularly Krishna, cannot have any friends dearer than ourselves. The Panchalas, also, O thou of Vrishni’s race, even if they search the whole world to the confines of the sea, have no friends dearer to them than the Pandavas and the Vrishnis. Thou art even such a friend to this prince; and he also is a similar friend to thee. Ye all are to us even as we are to you. Acquainted as thou art with all duties, remembering now the duties thou owest to friends, restrain this wrath of thine, that has the prince of the Panchalas for its object. Be calm, O foremost one of Sini’s race! Forgive the son of Prishata, and let Prishata’s son also forgive thee. Ourselves also will practise forgiveness. What is there that is better than forgiveness?’

Draupadi’s love and pride are evident in her words:

And that hero skilled in weapons and possessed of intelligence and wisdom, and intent on doing what is agreeable to the son of Dharma, that favourite and youngest born of the Pandavas, is my husband Sahadeva! Heroic, intelligent, wise and ever wrathful there is not another man equal unto him in intelligence or in eloquence amid assemblies of the wise. Dearer to Kunti than her own soul, he is always mindful of the duties of Kshatriyas, and would much sooner rush into fire or sacrifice his own life than say anything that is opposed to virtue and morals.

He that is compassionate to all creatures, is endued with modesty and acquainted with mighty weapons, is soft and delicate and virtuous,–he that is dear to me,–that mighty bowman Sahadeva, that hero and ornament of assemblies,–he, O Krishna, who is youthful in years, is devoted to the service of his brothers, and is conversant with both virtue and profit, whose brothers, O slayer of Madhu, always applaud the disposition of that high-souled and well-behaved son of mine,–tell me, O thou of the Vrishni race, of that heroic Sahadeva, that foremost of warriors, that son of Madri, who always waiteth submissively on his elder brothers and so reverentially on me.

When bent upon carnage Sahadeva, mounted on his car of noiseless wheels, and motion incapable of being obstructed, and set with golden stars, and drawn by well-trained steeds, will make the heads of monarchs roll on the field of battle with volleys of arrows,–indeed, beholding that warrior skilled in weapons, seated on his car in the midst of that frightful havoc, turning now to the left and now to the right and falling upon the foe in all directions, then will the son of Dhritarashtra repent for this war. Indeed, when the modestbut mighty Sahadeva, skilled in battle, truthful, conversant with all the ways of morality, and endued with great activity and impetuousness, will fall upon the son of Gandhari in fierce encounter and rout all his followers, then will the son of Dhritarashtra repent for this war.

Sahadeva to his eldest brother:

In brief: Sahadeva is an exceptional and unique character. He will always be one of my most favorite characters whom I admire. His love for his mother, the Divine, his wife, his elder brothers, along with his wisdom, his courage, his valour, all these deserve to be acknowledged.

I will end this answer with Krishna’s words to Arjuna:

O terror of thine enemies, what more need I tell thee, but that where thou and Pritha, and the king, the son of Dharma, and the mighty Bhimasena and the two sons of Madri are, there am I attracted with exquisite delight.