There are figures that share slightly similar stories across various cultures. Here are some of them who comes to my mind. There might be many more. The civilization of Egypt is not yet completely discovered. The scripts and texts available are not fully translated as most of the words in the scripts are unknown. Thus there is mixture of attributes used for deities and their meaning. Single deity is described with many self contradictory narrations

3. Yama and Osiris / Weeping of Yami and Isis

Osiris is the god of underworld and death. He is the son of sun god Ra. He is the judge of the dead in afterlife. He is depicted as either green or black in complexion. His wife and sister Isis flooded the Nile river with her tears while mourning the death of Osiris.

Yama is the god of underworld and death. He is the son of sun god Surya. He is the judge of the dead in afterlife. He is depicted as either green or black in complexion. His wife and sister Yamuna or Yami mourned his death for a long time. Yami is associated with river Yamuna.

4. Sun God / Ra / Surya appears in all cultures. Surya’s chariot is driven by Aruna like Seth drives Ra’s chariot. Both Aruna and Seth are bird-like figures. Garuda is younger brother of Aruna. Garuda associated with Garuda Purana, book that deals with soul after death. Horus is associated with Egyptian book of the dead. Garuda often acts as a messenger between the gods and men and is called the ranger of the skies.

Anzu steals the tablets of destiny. Anzu is the servant of chief sky god Enlil. Ninruta chases Anzu with his thunderbolts.

Garuda steals the elixir of immortality. Garuda is the servant of chief god Vishnu. Indra chases Garuda with his thunderbolts.

Both Anzu and Gardua are bird-like figures.

Shukra was the teacher of Asura. He had one eye. He was the son of Bhrigu and grandson of Brahma. His main weapon was a magic stick or spear. Brahma was the creator. Asura are often depicted with horned helmets. Shukra is considered as a poet.

Odin was the father of Aesir. He had one eye. He was the son of Burr and grandson of Buri. His main weapon was spear. Buri was the first god in Norse myth. Odin is considered as a poet. Khnum is referred to as father of the fathers and fathered many gods and goddesses. Daksha was one of the sons of Brahma and a main prajapati from whose line Devas and Asuras come from. Many goddesses like Aditi, Diti, Danu, Sati etc came from Daksha. Daksha was known as the bright one. Both of them are depicted with the head of a goat like creature.

Heqet, wife of Khnum is associated with childbirth. Prasuti Tantra, the book of obstetrics is named after Prasuti, the wife of Daksha. Parvati is the other half of Shiva in Ardhanarishvara form. Shiva is the destroyer of the world. Parvati is associated with Kalpavriksha, tree of life. 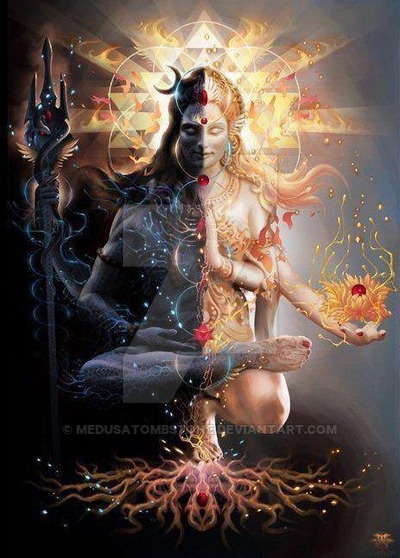 Apep is embodiment of chaos. He is shown as a giant serpent. Apep was the greatest enemy of Ra. Apep tries to swallow the sun.

Rahu is the embodiment of chaos. He is shown as a serpent. Rahu was the greatest enemy of Surya. Rahu tries to swallow the sun. Geb is the god of the Earth. He was the son of Shu. Shu was the god of wind and air. Geb is also known as father of snakes.

Kashyapa is known as the lord of creatures and is regarded as the father of the Earth. He was the son of Marichi. Marichi was the chief of wind gods. Kashyap was the father of snakes.

Varuni is the goddess of alcohol. Vinata is the mother of Tarkhya, Arishtanemi, Garuda, Aruna, and Varuni. Vinata is considered as mother of birds. Varuni is the wife of Varuna, god of water. Varuna is the keeper of souls of drowned and so is also a god of death and immortality.

Ankh is known as breath of life and said to represent the “key of life.” It is said to be a symbol of resurrection to life. It is also used to represent planet Venus.

Symbol of Shukra, god of Venus is Ankh. Shuka used Sanjeevani Mantra to resurrect the dead. Gods and demons pulled the Rope of Time as outlined in the Egyptian tomb.

Gods and demons pulled Vasuki, the serpent king as rope. Vasuki’s elder brother Shesha is a symbol of time. When Sheshanaga uncoils, time moves forwards and when he coils, world ceases to exist.