The construct is also hiding much numerical mysticism connected to time. The sun defines time by its passage across the sky. The carriage has 24 wheels for the lunar phases according to Indian tradition. And the wheels as such are miracles. They have 8 spokes, symbolizing the 8 periods of a day as was traditional in old India.

The temple is a UNESCO World Heritage Site and has also featured on various list of Seven Wonders of India. The temple is 35 km from Puri and 65 km from Bhubaneswar.

It took 16 years to built the sun temple and it was made of black granite and black pagoda.

The temple has earned the pride of being one of the World Heritage Sites in the world. This is due to the unique architectural style of the temple, which is completely made out of stone and comprises fine stone carvings.

The entire structure, resembling a colossal chariot with 12 pairs of wheels, lavishly sculpted with symbolic motifs and pulled by seven horses, was so designed to let the first rays of the sun fall on the main entrance, say experts.

The main attraction of the temple is its twelve pairs of wheels located at the base of the temple. These wheels are not ordinary wheels but tell time as well – the spokes of the wheels create a sundial.

One can calculate the precise time of the day by just looking at the shadow cast by these spokes.

The Science behind the Construction.

A heavy magnet was placed at the temple top and every two stones of the temple is sandwiched by iron plates. The idol was said to have been floating in air due to the arrangement of magnets.

The unique arrangement of the main magnet along with the other magnets caused the main idol of the temple to float in air. 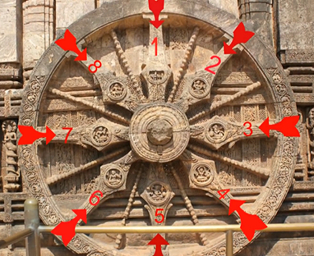 Stories Which Remain As Legends With No Answers

The temple had iron beams between the stones and a central magnet which held the beams in place. Later the loadstone was removed during the Portuguese period since it was disturbing the compasses and ships running aground. The other stones/beams held in alignment by magnetic force till now, crashed regularly to bring the destruction. 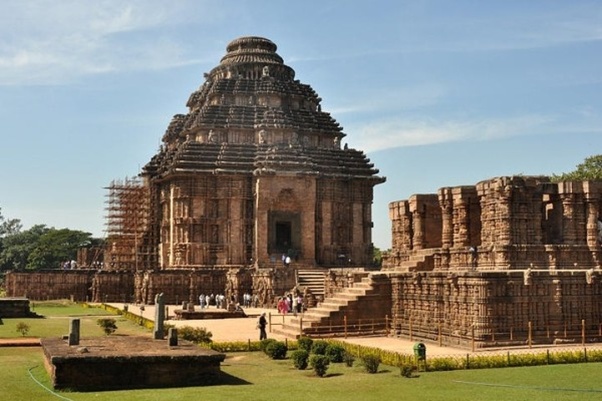 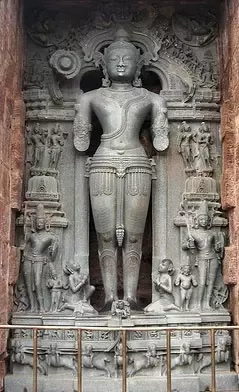 The main pratima (idol) was believed to be floating in the air because of the unique arrangements of the main magnets and other series of magnets. When the balance was disturbed, it was shattered in the absence of binding forces.

The placement of the temple had been aligned in a way that the first rays of the sun falling on the coast would pass through the Nata Mandir and would reflect from the diamond placed at the centre of this idol in the main sanctum. This phenomenon would last for a couple of minutes in the early morning.

An 1838 painting by Fergusson

Local legends say that the huge 12 chariot wheels have been designed as sun dials to find time accurate to 1.5 minutes. To calculate this, one must place a long stick at an axis parallel to ground and note where the shadow falls. The distance between two wider spokes is of three hours (180 minutes). This is subdivided by the thinner spoke into 90 minutes. This is subdivided by 30 beads in the rim into three minutes. Depending on where the shadow falls in the bead, it can be refined to 1.5 minutes. Also, for each month, a particular wheel needs to be selected. Even the modern day sun dials have sidereal corrections to cover lateral movement of sun over seasons and its efficacy still remains a myth.

There was an advanced smelting foundry for casting iron beams, which interspersed stone beams and boulders to bear load

Madala Panji – the chronicle of Puri Jagannath Temple started by Anandavarma Chodagangadev (1078-1150), and also talks about some of the events of the Sun Temple.

Researchers have painstakingly collated this palm script manual with 23 leaves written in Karani script in Old Oriya. This details the temple plan, full view diagrams and cross sections. These are the only visual clues to the original state of the temple as it stood in the 16th century. 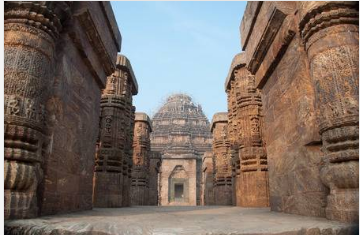 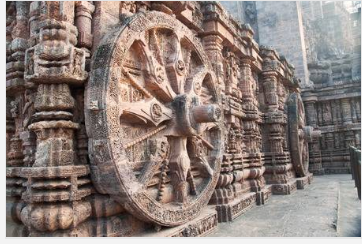 Sun Temple of Konark is renowned throughout the world for its stone sculptures. The temple was designed in the shape of a huge chariot drawn by 7 mighty spirited horses on 12 pairs (total 24 wheels) of gorgeously decorated wheels at its base. The size of the wheel is of 9 feet 9 inches in diameter and each one of them having 8 wider spokes and 8 thinner spokes.Out of these 24 wheels 6 are in either side of the main temple, 4 wheels are on each side of the Mukhasala and 2 wheels on each side of steps at eastern front. The huge wheels of the Konark Temple are one of the major attractions for visitors.

Various theories have been advocated regarding the significance of Konark wheel. According to some, the 7 horses represent the days of the week and the 12 pairs of wheels represent the 12 months of the year and the 24 wheels signifies 24 hours of a day and the 8 major spokes signifies prahars (three hour period) of a day. According to others, the wheels of the chariot have been interpreted as the ‘Wheel of Life’. They portray the cycle of creation, preservation and achievement of realisation. These 12 pairs of wheels may also possibly represent the 12 zodiac signs. Some also believe that the Wheel of Konark is the same as the Dharmachakra of the Buddhists – The Wheel of Karma, The Wheel of the Law.

out of these 24 wheels, 2 wheels will show you the time accurately from sun rise to sun set. In the wheel and you put your finger at centre of the axel and along with other tourists was surprised that the finger’s shadow showed the precise time of the day. It’s difficult to explain the technique in writing so I created following images based on his explanation. 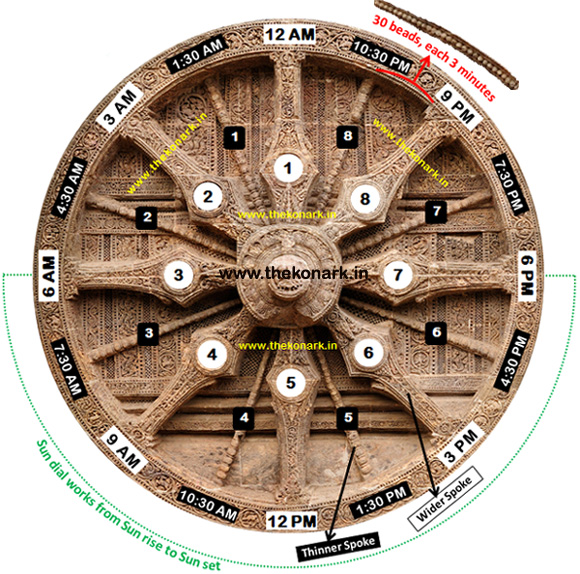