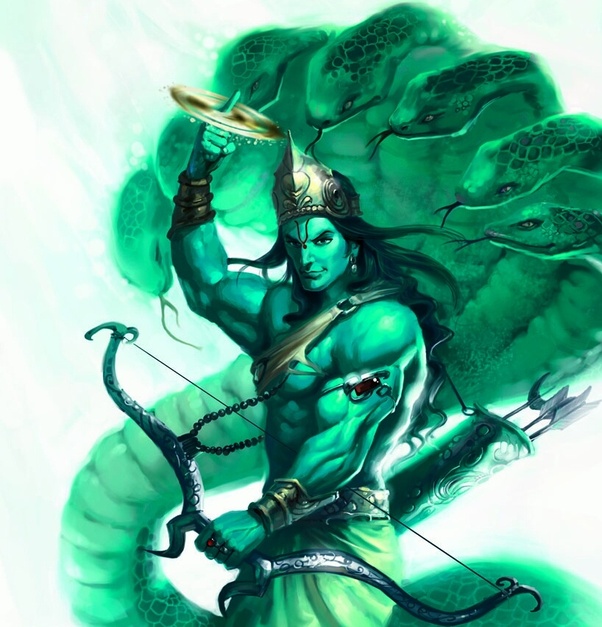 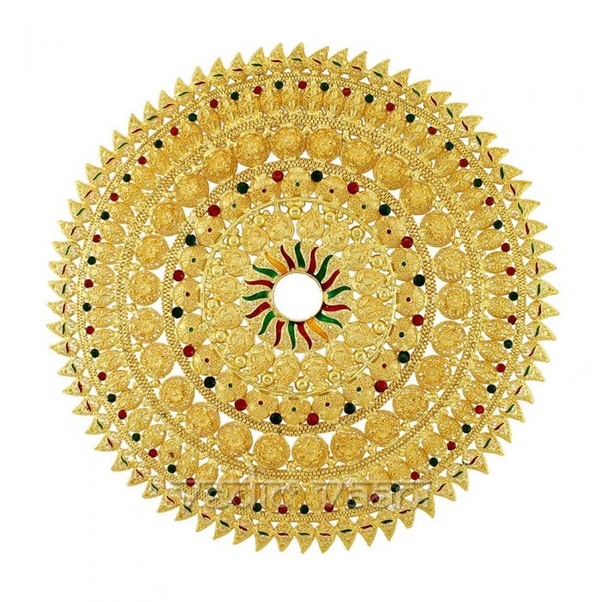 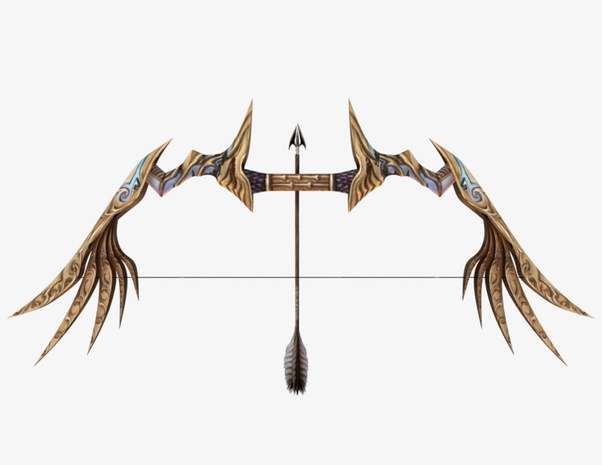 The eighth incarnation of Lord Vishnu. Like in Treta Yuga, Lord Vishnu was born in Dwapara Yuga to restore the eternal law once again. Lord Krishna was conceived in the womb of Devaki, the second wife of Vasudeva. Later Yashoda became his foster mother. Lord Krishna is considered to be the supreme personality of godhead on earth, since he was a full incarnation of Lord Vishnu. As a warrior, Lord Krishna was invincible and never lost a single battle in his entire lifetime. Lord Krishna killed the tyrant king Kamsa and many demons sent by Kamsa in his childhood. He also annihilated many evil kings throughout his life for the preservation of the eternal law. Lord Krishna took a vow to not raise any weapons in the Kurukshetra war. He instead chose to be Arjuna’s charioteer and the strategist of the Pandava side in the Kurukshetra war. All the major events in the Kurukshetra war were orchestrated by Lord Krishna, which eventually lead to the victory of the Pandavas over the Kouravas. 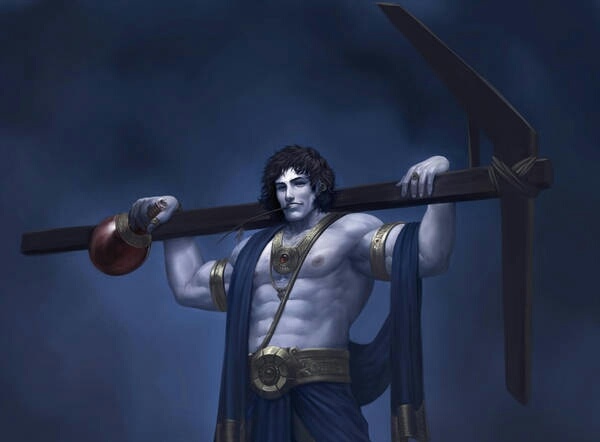 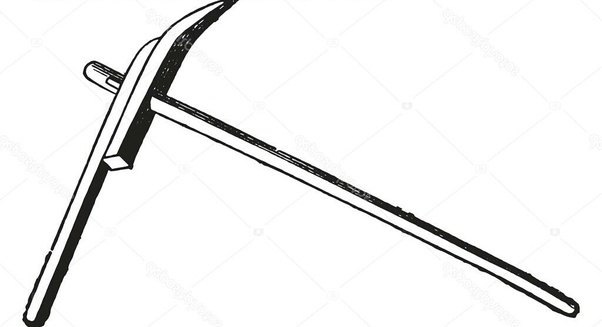 Mace ( he was the greatest mace fighter according to the Mahabharata )

Like Lakshmana in Treta yuga, he was the incarnation of Shesha naga (the king of snakes) in Dwapara yuga. When Lord Balarama was conceived, his embryo was moved from Devaki’s womb into the womb of Rohini, the first wife of Vasudeva. Lord Balarama was the elder brother of Lord Krishna and an invincible warrior like him. Plough was his weapon and it was possible for him to subdue any warrior on earth. Lord Balarama and Lord Krishna killed many demons in their childhood. The Yadava race was an invincible warrior race due to the powers of him and Lord Krishna. Lord Balarama is known for his extreme wrath and incredible strength. Once Bhishma, Karna, Duryodhana, and others Kuru warriors imprisoned his nephew Samba ( Lord Krishna’s son.) When they refused to free Samba after a polite request, Lord Balarama summoned his plough and in extreme anger, dragged the entire city of Hastinapura into river Yamuna. The Kuru warriors fearing the wrath of Lord Balarama, set Samba free. Lord Balarama taught both Bhima and Duryodhana the art of mace fighting. When the Kurukshetra war broke out between the Kauravas and the Pandavas, he cared for both sides and so remained neutral. He went for a pilgrimage and returned on the last day, to watch the mace fight between his disciples Bhima and Duryodhana. 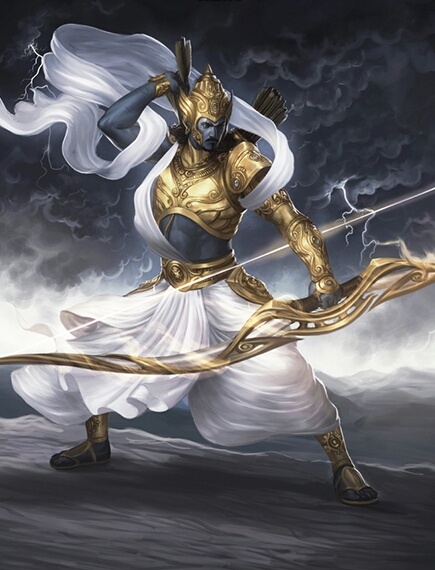 Gandiva bow ( the bow which which he obtained from Lord Agni )

Pashupatastra ( the invincible weapon which he obtained from Lord Shiva )

Aindrastra ( the weapon which he used many times in battles ) 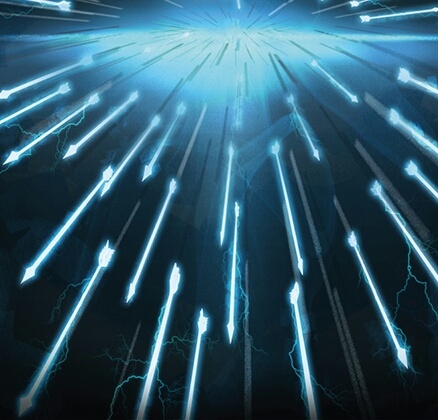 The youngest son of king Pandu and his first wife, Kunti. Arjuna is considered to be the best archer in the Mahabharata. During his childhood Arjuna was the best pupil in preceptor Dronacharya’s gurukul and was superior to all others in archery in the gurukul. Arjuna performed numerous extraordinary deeds all throughout his lifetime. He defeated Lord Indra and other gods in the Khandava forest. He conquered the entire northern direction for the royal sacrifice of Yudhishthira. He killed the invincible Nivatkavacha and Kalakhanja demons whom even the gods found difficult to vanquish. In King Virata’s kingdom, Arjuna single-handedly defeated the foremost kuru warriors like Bhishma, Drona, Karna, Aswatthama, and Duryodhana in a battle. On the 10th day of the Kurukshetra war, Arjuna (guarded by Shikhandi) vanquished Bhishma and rendered him close to death. In the Kurukshetra war, Arjuna killed many prominent Kourava warriors like Bhagadatta, Shrutayu, Shrutayudha, Jayadratha, Karna, and Susharma. Arjuna killed 7 akshouhinis of Kourava soilders on the 14th day of Kurukshetra war. Arjuna killed the most number of Kourava soilders and played a major role in victory of the Pandava side in the Kurukshetra war. After the Kurukshetra war, Arjuna conquered many kingdoms for the horse sacrifice of Yudhisthira. Arjuna was almost invincible as a warrior. 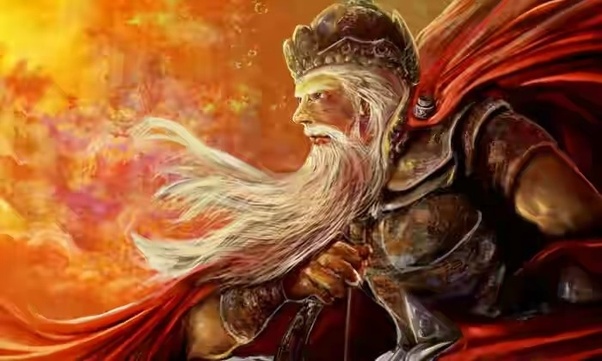 Prasvapan ( the weapon by which he defeated Parashurama )

The youngest son of King Santanu of Hastinapura. He was the incarnation of Prabhasa, the eighth Vasu. Bhishma was an unparalleled warrior of his time.Bhishma single-handedly defeated all the kings of the earth assembled in the swayambara of the daughters of the King of Kashi. In a battle, Bhishma defeated his preceptor Parashurama, the sixth incarnation of Lord Vishnu. In the Kurukshetra war, Bhishma was the commander-in-chief of the Kourava army for the first 10 days. Bhishma fought for 10 days in the Kurukshetra war and killed 10,000 chariot warriors of Pandava side every day. Bhishma fought valiantly to such an extent that he made Lord Krishna break the vow of not raising any weapon twice in the Kurukshetra war. Ultimately, Bhishma was brought down by Arjuna on the 10th day and rendered close to death. He was made to lie in a bed of arrows by Arjuna. Ultimately, Bhishma gave up his life 40 days after the Kurukshetra war. 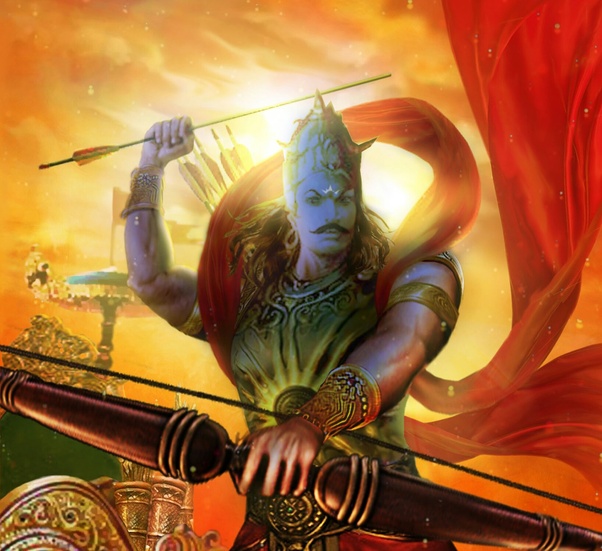 Vijaya bow ( the bow which he obtained from his preceptor Parashurama ) 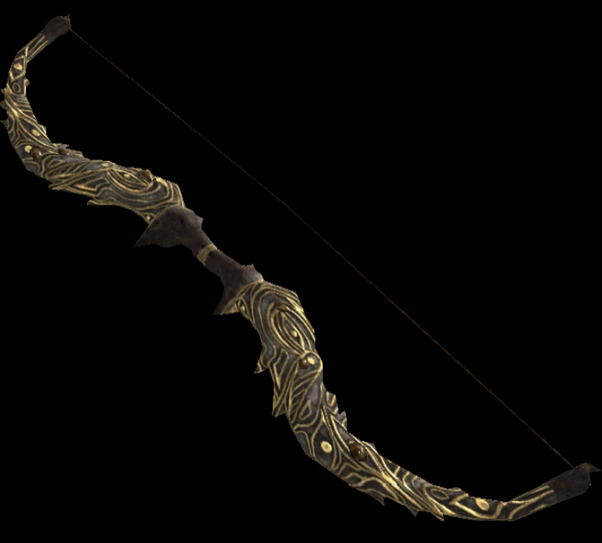 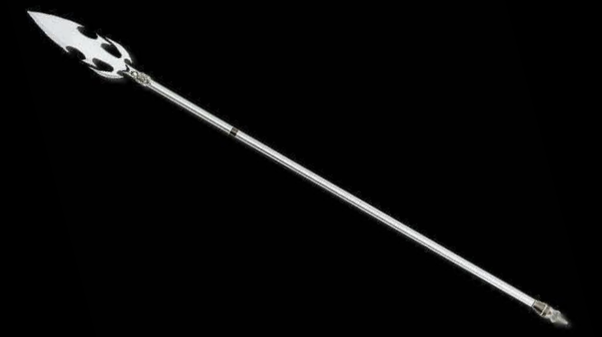 Vasavi Shakti ( the lightning spear by which he killed Ghatotkacha ) 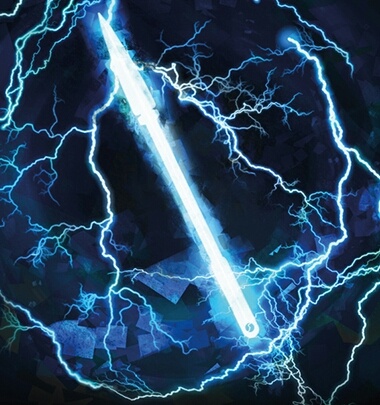 The son of Lord Surya, the Sun god. He was the eldest son of Kunti, born to her much before her marriage to King Pandu. Karna was abandoned by his mother Kunti when he was born. He was later found by Adhiratha. Thus Adhiratha and his wife, Radha became Karna’s adoptive parents. Karna mastered the science of warfare in his childhood under the guidance of his preceptor Parashurama. Karna is one of the greatest warriors in the Mahabharata and one of the few warriors extremely skilled in various modes of warfare. He defeated the invincible king Jarasandha in a wrestling combat. He is one of the few warriors in the Mahabharata who conquered the entire earth. Karna defeated all the major Pandava warriors except Arjuna and Abhimanyu in the Kurukshetra war. On the 14th night of the Kurukshetra war, he killed the demon Ghatotkacha by the Vasavi Shakti ( the lightning spear of Lord Indra.) During the Kurukshetra war, Karna defeated and spared the life of the four Pandava brothers Yudhishthira, Bhima, Nakula, and Sahadeva. In the Kurukshetra war, Karna was the only warrior from the Kourava side who succeeded in capturing Yudhishthira, a feat which neither Bhishma nor Drona achieved. During his tenure as the commander-in-chief of the Kourava army for 2 days (i.e. on the 16th day and the 17th day), Karna killed atleast 1.5 akshouhinis of Pandava soilders. According to Sanjaya (the reporter of the Kurukshetra war), Karna caused greater carnage than Bhishma and Drona in the Pandava army. Finally, Karna was killed by Arjuna in a fierce encounter with him on the 17th day of Kurukshetra war. 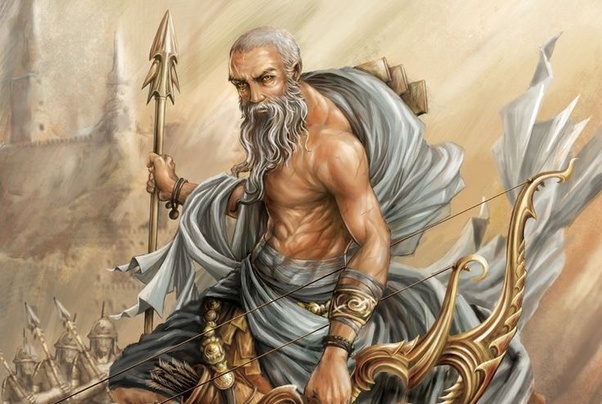 The preceptor of both the Pandavas and the Kouravas. His favourite disciple was Arjuna, the third Pandava brother. Drona had complete mastery over the science of warfare and knowledge of all celestial weapons. He was an excellent strategist of vyuhas (military formations.) Drona arranged the Kourava troops in the inpenetrable Chakra vyuha (constant rotating circular formation) on the 13th day of the Kurukshetra war in an attempt to capture Yudhishthira and win the war. However his attempt was made futile by Abhimanyu. Drona was the commander-in-chief of the Kourava army side for 5 days ( i.e. from days 11–15. ) He was particularly invincible on the 15th day and killed king Drupada & King Virata on that day. Drona caused a vast carnage in the Panchala army of the Pandava side and killed more than 2 akshouhinis of Pandava soilders during his tenure as the commander-in-chief of the Kourava army. His was killed by Dhristadyumna on the 15th day, when he withdrew his weapons. 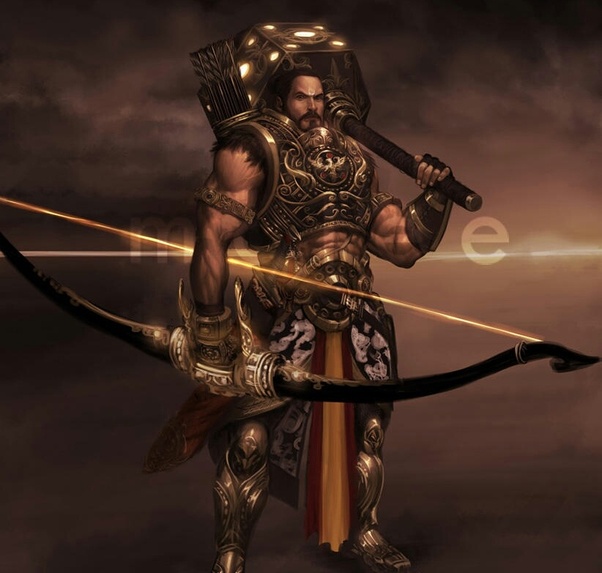 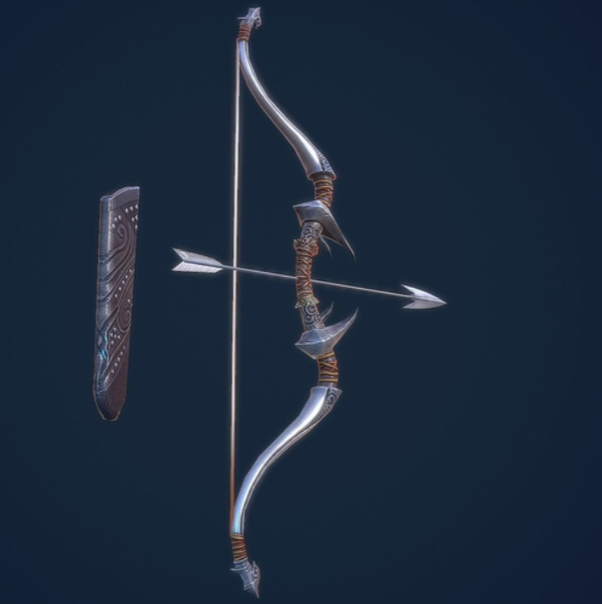 Mace ( he was the greatest mace fighter after Lord Balarama )

The younger brother of Yudhishthira and the elder brother of Arjuna. Bhima was one of the most powerful warriors of his time. According to the Mahabharata, Bhima had a physical strength of 10,000 elephants. Bhima was an invincible mace fighter. He conquered the entire eastern direction for Yudhishthira’s royal sacrifice. He killed Jarasandha in a wrestling combat. He also killed many powerful demons like Jatasura, Kirmira, Bakasura, Maniman, and Hidimba. In the Kurukshetra war, Bhima defeated major Kourava warriors like Bhishma, Karna, Shalya, Duryodhana, and Kritavarma. On the 18th day, Bhima hit Duryodhana below the thigh in the mace fight with him, which rendered Duryodhana to death. In the Kurukshetra war, Bhima killed the 100 Kourava brothers and 1 akshouhini of Kourava soilders. 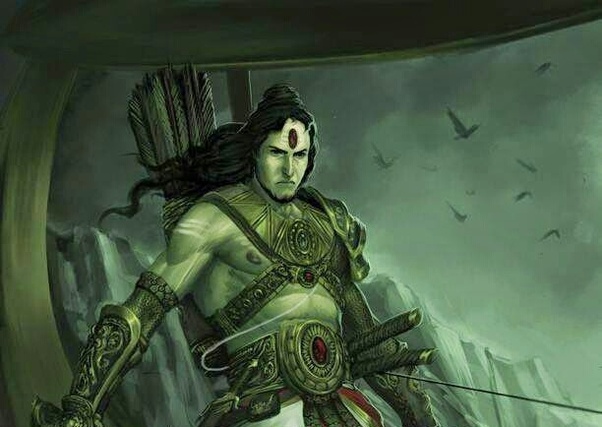 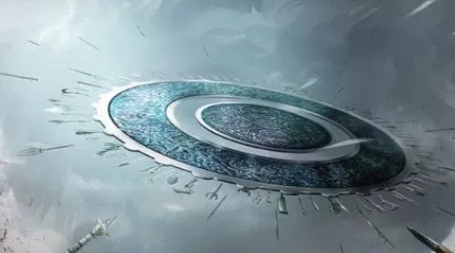 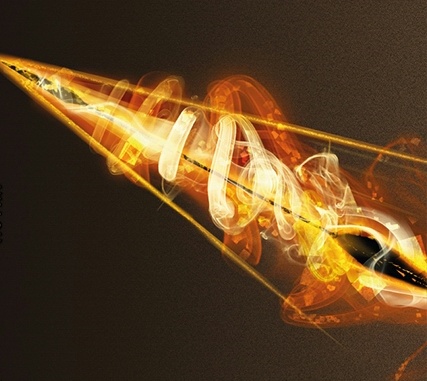 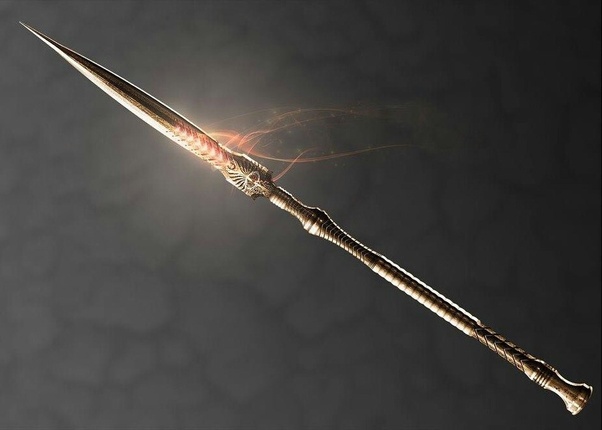 He was the son of Drona and Kripi. He was an angsha avatar (partial incarnation) of Lord Shiva. Like his father Drona, Aswatthama was extremely knowledgeable about celestial weapons. Aswatthama is considered to be the greatest warrior after Arjuna who had the knowledge of divine weapons. Aswatthama killed 1 akshouhini of demon soilders belonging to Pandava army on the 14th night of Kurukshetra war. After his father Drona’s death on the 15th day, an extremely angry Aswatthama unleashed the Narayanastra upon the Pandava army and killed many Pandava soilders. On the same day, he invoked the Agneyastra and killed 1 akshouhini of Pandava soilders. Aswatthama, Kritavarma, Kripa, and Vrishaketu (a son of Karna) were the lone survivors from the Kourava side at the end of the Kurukshetra war. 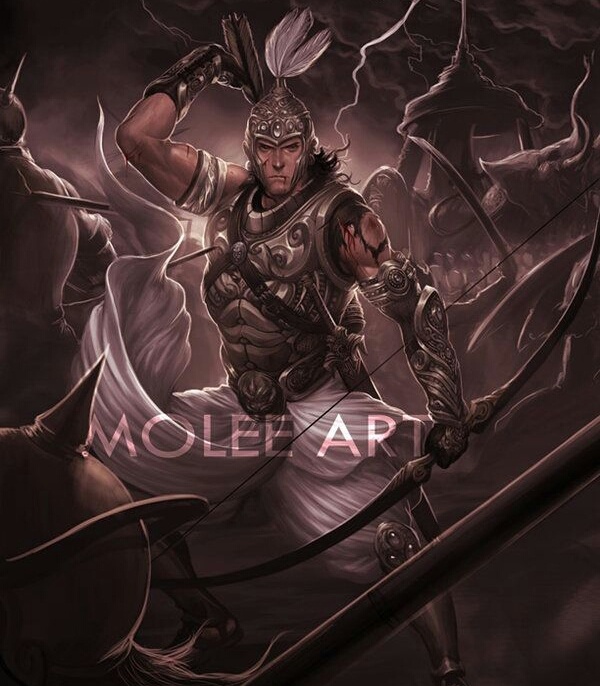 The greatest Yadava warrior after Lord Krishna and Lord Balarama. According to the Mahabharata, Satyaki was from the Vrishni clan of the Yadava race and a disciple of Arjuna. In the Kurukshetra war, Satyaki fought for the Pandava side. Satyaki killed several prominent Kourava warriors like Bhurishrava, Vyaghradatta, Jalasandha, Sudarsana, and the demon Alambusha. He played a major role in the victory of the Pandavas in the Kurukshetra war. Satyaki fought well in most of the days but was invincible on the 14th day. Satyaki defeated major Kuru warriors like Drona, Karna, Shalya, Duryodhana, Aswatthama, Kripa, and Kritavarma on the 14th day. Satyaki, Lord Krishna,Yuyutsu, and the 5 Pandava brothers (Yudhishthira, Bhima, Arjuna, Nakula, & Sahadeva) were the lone survivors from the victorious Pandava side at the end of the Kurukshetra war. 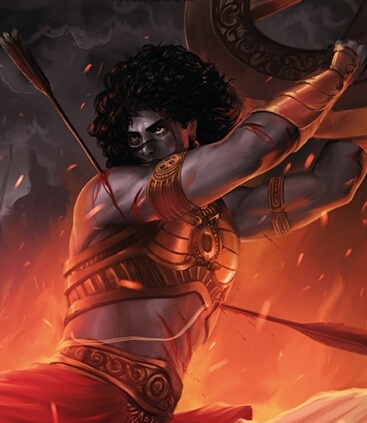 Roudra bow ( the bow which he obtained from Lord Brahma ) 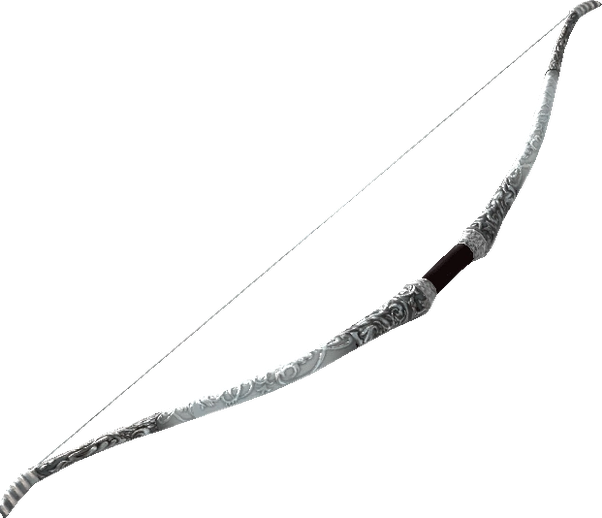 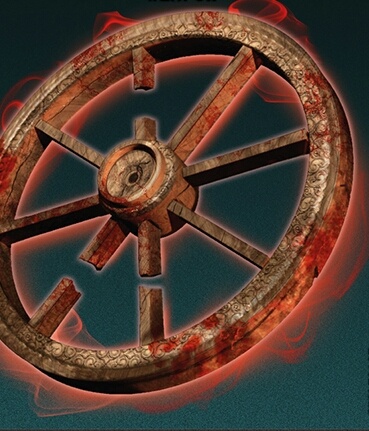 The son of Arjuna and Subhadra, Lord Krishna’s sister. Abhimanyu was one of the greatest warriors who fought for the Pandava side in the Kurukshetra war. Abhimanyu is remembered for the 13th day of Kurukshetra war. He was invincible on the 13th day of the Kurukshetra war. On the 13th day, Abhimanyu penetrated the inpenetrable Chakra vyuha (constant rotating circular formation) of the Kourava army and killed thousands of Kourava warriors. He also managed to defeat foremost Kourava warriors like Drona, Shalya, Karna, Kripacharya, Aswatthama, and Duryodhana. Inside the Chakra vyuha, Abhimanyu died on the same day, after he failed to counter a combined group attack by Drona, Karna, Kritavarma, Bhurishrava, and Aswatthama.

The analysis has been done according to the critical edition of Mahabharata translated in english by Bibek Debroy.

5 thoughts on “Top 10 Warriors According to the Mahabharata”