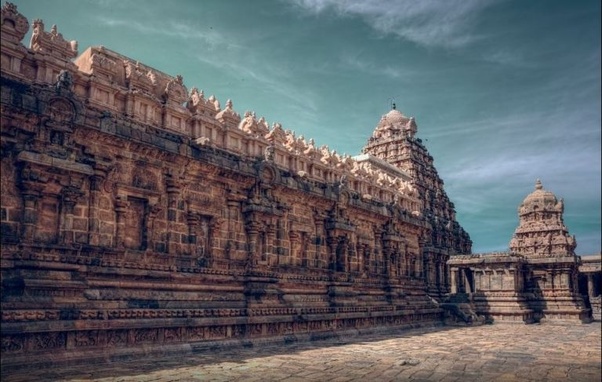 The musical steps in Airavatesvara temple, Dharasuram is one of the great mysteries of all time. This Lord Shiva temple is said to be built by Rajaraja Chola II in the 12th century CE. This temple is located near Kumbakonam, in the southern state of Tamil Nadu, India and recognized as UNESCO World Heritage monument. The entrance of the temple has steps made of stones, which produces seven different sounds on tap. One can hear all the seven swaras at different points. 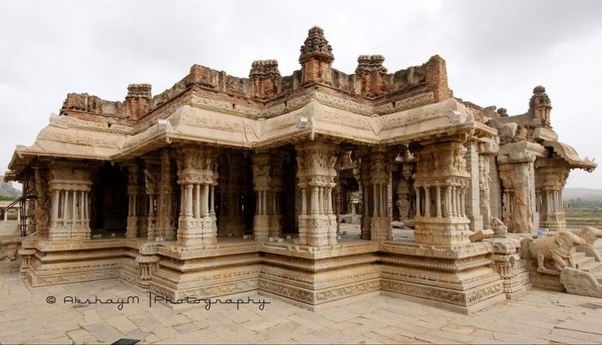 Sri Vijaya Vittala temple is located in the historical town of Hampi, Karnataka, and is dedicated to Lord Vitthala. Situated at the end of the ruined Vittala Bazaar, tourists can reach this beautiful temple from all parts of Hampi. This temple is historical in the sense that the construction dates back to 15th century. The temple is also famous for Ranga Mantapa which has 56 musical pillars, known as Sa-re-ga-ma pillars. As one taps the pillars, musical notes are emitted by them in the form of western do re mi sa…. 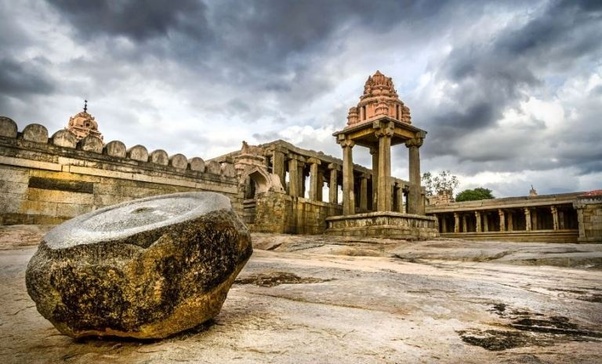 The Veerabhadra temple, also known as Lepakshi temple, is located in the Lipakshi district of Andra Pradesh. The temple is known for its architectural beauty, however, what catches hold of most of the visitors is the hanging pillar of the temple. Although there are 70 pillars in the temple, one pillar which lies hanging in the premises of the temple is the real piece of wonder. Thus, many people who visit the time passes a piece of cloth through the bottom of the pillar, to test its reality. The mystery behind how this pillar stays intact without any support remains an unknown till date.

4. The Temple of Granite 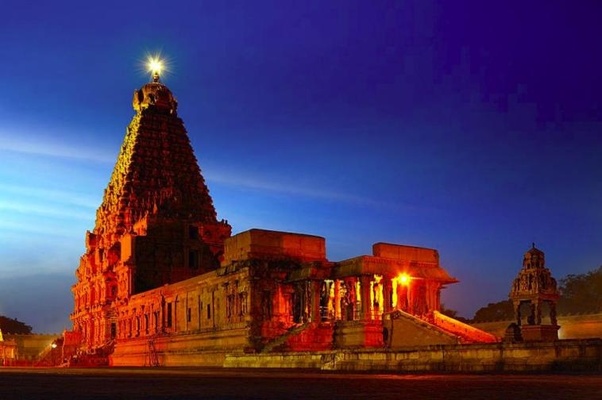 The Brihadeeswarar Temple is located in Thanjavur, TamilNadu, which is hailed for its architectural beauty. Most of the temple is carved out of pure granite which is astonishing in itself as there were no granite sources found anywhere within 60Kms of the temple. The temple’s apex, called the ‘Gopuram’ is found to be made out of a single stone now weighing 80 tons. Considering the granite reserves were so far away, how they managed to mount it in place has no practical explanations so far. 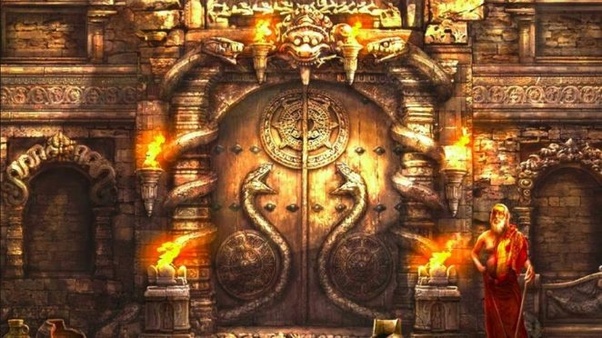 Anantha Padmanabha Swamy Temple is a Hindu temple located in Thiruvananthapuram, India. The temple has what seem to be seven secret vaults. On the supreme court’s request, the committee overseeing the temple has opened 6 of those vaults unveiling ornaments of gold estimated to be worth over 22 billion dollars. Now, the 7th vault has steel doors with no latches or bolts. It has carvings depicting 2 cobras. It is believed that the door is opened only by a secret chant and any other means would bring catastrophes. It is considered both a mystery and highly dangerous.

6. Flag that waves opposite to the direction of the wind 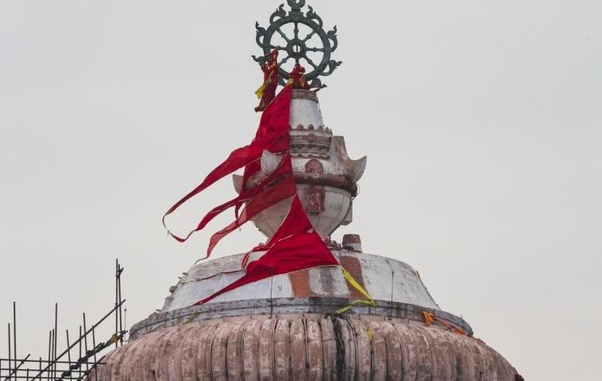 Famous Jagannath temple of Puri is a very important place for Hindu devotees. It is one of the Char Dham pilgrimages in India. It is quite amazing that the flag on top of the Sikhara of the temple always floats in the opposite direction of the wind. Every day a priest climbs the dome of the temple which is as tall as a 45 story building and changes the flag. This ritual has been continuing since 1800 years. The ritual says if it is not changed any day, the temple must be shut for the next 18 years. 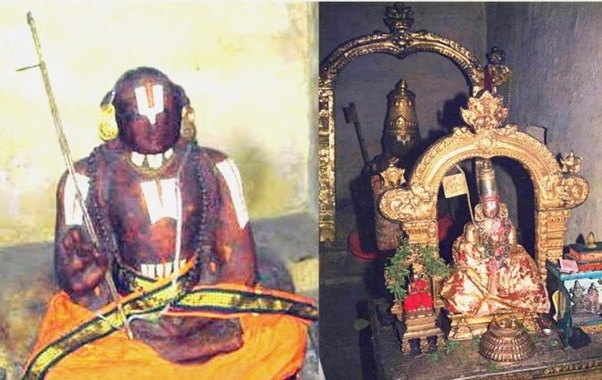 Sri Ranganathaswamy Temple is a shrine dedicated to Sri Ramanujacharya who is also known as Ramanuja. It is one of the most illustrious Vaishnava temples in South India rich in legend and history. What follows is amazing, there is a 1000 Years old mummified body of Sri Ramanujacharya preserved in Sri Ranganathaswamy Temple. His original body is kept in normal sitting position and open to all for viewing. The body being solidified just at it is, eventhe eyes are clearly visible and on a closer look, also the nails can be noted. 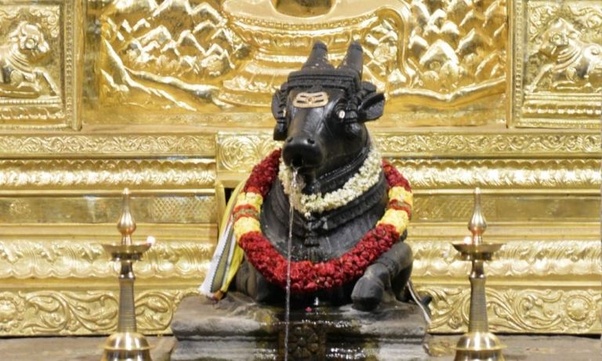 The Kadu Malleshwara Temple is a 17th-century A.D. Hindu temple dedicated to the Shiva located in the Malleshwaram locality of Bengaluru. In the year 1997, during some construction process near the temple, the workers found another temple of ‘Nandi ‘ (a statue of the bull which is called the vehicle of Lord Shiva) buried. As they further dug out the temple, a small pool of water was found inside the temple and even the Nandi was ejecting clean water from its mouth which flows to the Shiva Linga. However, the source of water for both of them is yet unknown. 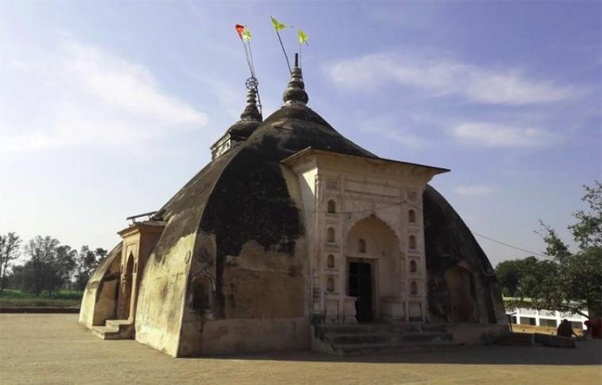 This Jagannath Temple from Kanpur is also known as ‘Rain Temple’ or ‘Monsoon Temple’ and is more than hundreds of years old. Here, it is believed that the water droplets accumulated on the ceiling of Lord Jagannath temple predict, whether the upcoming monsoon season would be good or bad. If the size of water droplets is big, it is believed that there will be good rainfall and if it is small, then drought may occur. It is believed that the prediction is not just a day or two in advance, in fact, it predicts the onset of monsoon a good fortnight in advance. The roof of the temple starts dripping 15 days before the start of the rainy season and it is the trickle that reveals the type of showers that should be expected. A thin volume of the trickle indicates scanty rainfall, while a good volume indicates heavy showers. Thus, on the basis of the predictions, the farmers nearby put an estimate to their harvest accordingly.

10. Temples of Shiva aligned in the same line 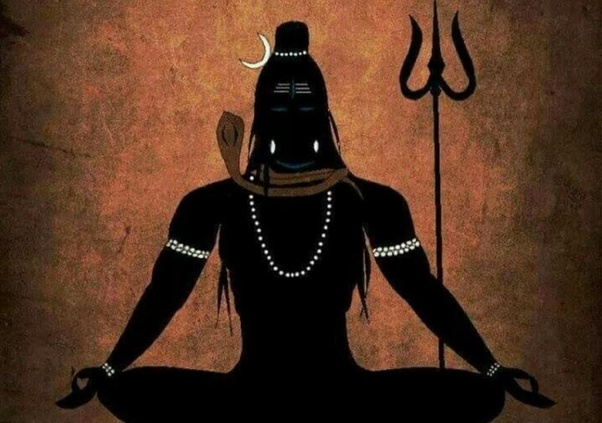 The collection of five temples known as Pancha Bhoota Stalam lies in South India which is held in reverence for centuries. These temples are considered to be Shiva Lingam representing various elements such as Air, Earth, Water, Fire, and Space. It is a striking fact that all these temples are geographically placed in almost a straight line. Among the five temples, three temples, which are Chidambaram Nataraja Temple, Ekambareswarar Temple, Srikalahasti Temples lie exactly aligned at 79 degrees, 41 minutes, East in longitude. Furthermore, the other two temples, Thiruvanaikkaval is located at around 3 degrees to the south and 1 degree to the west of the northern tip exactly of this divine axis, while Thiruvannamalai is around midway at 1.5 degrees to the south and 0.5 degrees to the west.