Skip to content
“Tulsi” often called as Holy Basil in English is one of the most sacred plant in Hinduism religion. The other part of the story is that Tulsi is not only important from religious point of view but has great medical significance too.
There are numerous properties of Tulsi that can be enlisted as follows-
Perhaps this is the reason it is said in Hindu Religion that  Households who plant Tulsi in their houses never suffers from illness. Also, today you will still find this plant of Tulsi in most of the households in India despite transition towards modernity by mass population and diminishing values in changing times.

A Ritual formed on Scientific Basis-
There is a popular custom in India that whenever you go to any temple in India, the priest there gives you tulsi with water and asks you to gulp it.
Have you ever thought why he does so OR what might be the reasons behind this common ritual which is being practiced since times immemorial? 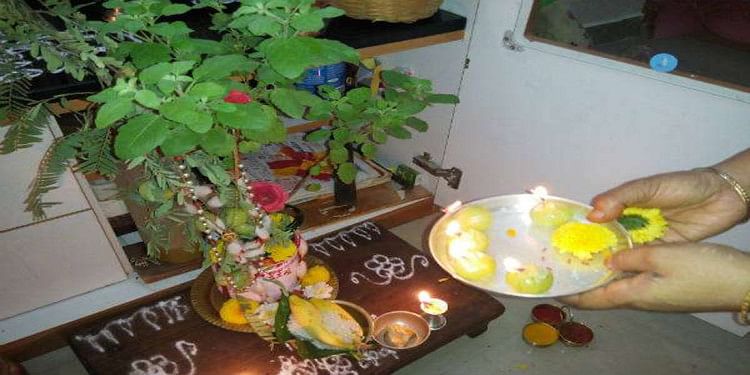 I have tried figuring out through various literature and came across a remarkable fact and explanation about this ritual.But before that, ‘Hat Off” to our ancestors who have really device enduring social systems in the interest of all.Yeah, our sages were great scientists and genius who were aware of the medical value of tulsi but also know that to preach it to general masses would be a task that will not be feasible at one go. So they might have associated it with a religious practice so people just follow it without any ‘do &don’t’ in their mind.
This would keep them away from most of the diseases and all knows that health is a preliminary key to happiness.
This is a fact that Tulsi has immense medicinal value apart from several other benefits but there is also a method underlined each benefit which must be followed exactly the same way to get most out of it. To elaborate it- Tulsi is also very rich in ‘Mercury’ content which is good for our body in a consumable form found in Tulsi but is bad for our teeth. This is why our religious practices have made it necessary in the form of ritual to never bite a fresh tulsi leaf and to gulp it with water only. This way we can get all the benefits of Tulsi without damaging our teeth.
We know very well that it is a vain effort to explain science to masses and asked them to follow it BUT still……..
Science and Technology is only useful when its benefits reaches to masses and helps in the development of whole society. Sages in Ancient times must have understood this idealism very well and thus had devised ways(associating it with religious ritual) to make it sure that benefits of science reaches to all levels of society.

Note- With reference to Japan Nuclear Disaster, I want to bring this fact to limelight that many studies and researches had suggested that Tulsi can also help to protect organs from ‘radiation poisoning’ .