The Jagannath Temple at Puri is the shrine of Lord Jagannath and one of the holiest pilgrimages in the world. It is arguably the largest Vaishnav shrine in the world,and draws millions of devoted Hindu pilgrims throughout the year.

There are several unexplained miracles regarding the Jagannath temple which even defy scientific explanations. Are these the Maya or playful illusions of Lord Jagannath for the acknowledgement of his greatness by us devotees.

It it observed that the flag located at the top the temple dome always waves in the opposite direction of air flow . 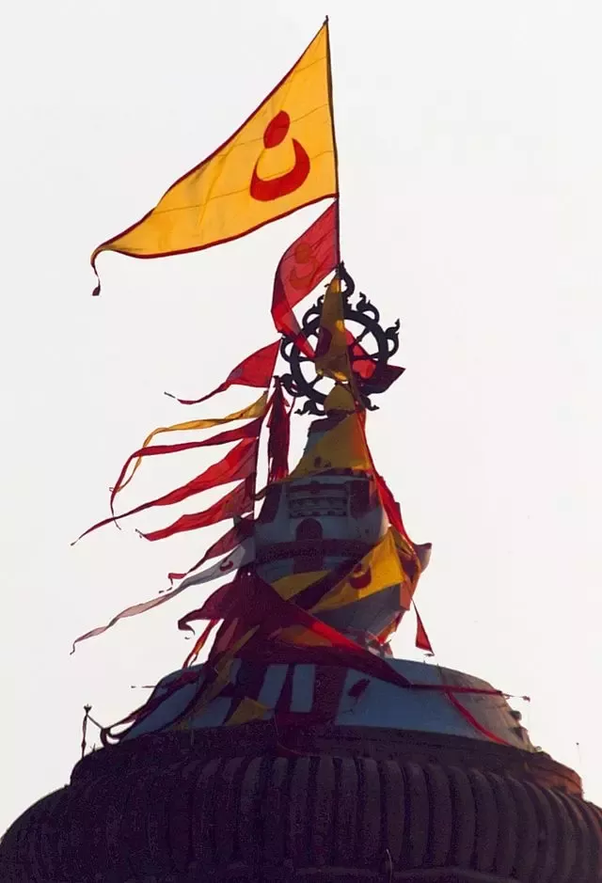 A ritual older then many civilizations. 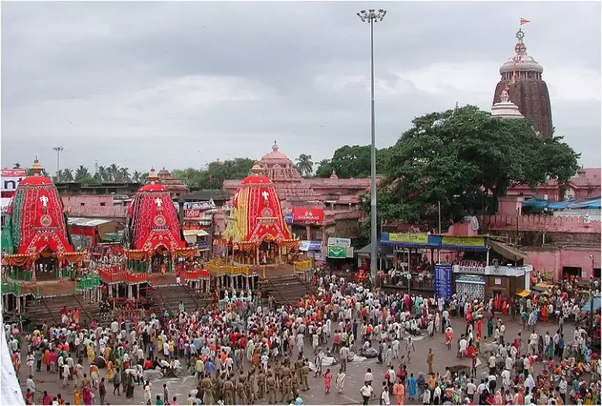 A priest climbs the dome of the temple which stands as tall as a 45 story building and changes the flag everyday Since 1800 years as a part of a ritual. If it is not changed any day, the temple must be shut for the next 18 years. The Sudarshan Chakra standing at the top of temple is 20 feet in height and weights a ton. It said to be visible from every corner of the city and it is installed in such a way that it makes you feel that it is facing toward you irrespective of the place you are in.

NOBODY KNOWS THE TECHNIQUE OF HOW THE CHAKRA WAS INSTALLED. fun fact: The chakra was brought all way up and installed on the gopuram 2000 years ago. The engineering techniques used at that time still remain as a mystery today. Take any place on earth, on daytime the breeze from sea comes to land and the opposite occurs in the evening but In Puri it is observed to be just the reverse.

NOTHING FLIES ABOVE THE TEMPLE. ABSOLUTELY NOTHING!

It is a surprise that nothing flies above the temple. No planes, not even birds. There is no scientific explanation for this yet. The temple is constructed in such a way that the shadow of the main dome of the temple cannot be observed at any given time.

THE MYSTERY OF THE PRASADAM.

There’s one saying about the prasadam served in the temple. The count of devotees visiting the temple varies from 2000 to 20,00000 depending on the day but the quantity of Prasadam cooked in the temple remains exactly the same throughout the year any given day yet none of it goes insufficient or wasted. The prasadam is cooked in pots using firewood. Exactly 7 pots are put one on top of another. Surprisingly, the top most pot is cooked first followed by the bottom pots in order.

THE MYSTERY OF THE SIMHADWARAM. THE PRESENT DAY STRUCTURE OF THE TEMPLE IS VERY DIFFERENT FROM THE IT’S INITIAL DESIGN. Present day structure of Sri Janagnnath Temple Puri is very different from the the initial design of the temple. The main temple was first constructed by the Chola kings and the Meghanada Pacheri, Mukha sala, Nata Mandapa and other assets of the Temple were later constructed by other rulers ruling the area in later times.

THE IDOLS ARE CHANGED EVERY YEAR. The old idols of the deity’s are buried on one another and it is said that they disintegrate on their own.

In one sense, Puri is synonymous, with Jagannatha and vice versa. For more than a century past, historians, foreign and Indian, have been trying to’ unveil the mystery of the three deities namely, Jagannatha, Balabhadra and Subhadra worshipped in the Puri temple. But the success they have achieved is almost negligible. All the same, the traditional authorities strongly hold that Jagannatha is perhaps as old as human civilization. The antiquity of Jagannatha is so much shrouded in mystery that it may take many more years for scholars to arrive at any definite conclusion. There are a number old works in Sanskrit which sing the glories of Odisha in general and of Puri in particular. A passage is frequently quoted from the Rig Veda and explained in the light of the well-known commentary of Sayana to show that the history of Jagannatha dates back to the age of the Rig Veda itself.

The Puranas (Voluminous works in Sanskrit containing accounts of ancient Indian history, culture, mythology, philosophy, religion, etc.) present elaborate accounts pertaining to the origin of Jagannatha in an atmosphere of mystery and divine inspiration. Prominent among the Puranas are the Skanda Purana, the Brahma Purana and the Narada Purana. Even in the Ramayana and the Mahabharata, there are references to the Shreene of Jagannatha. The Pandavas of the Mahabharata are believed to have come here and offered worship to Jagannatha. ,Some scholars hold that even Jesus Christ and Mohammed, the founders of Christianity and Islam respectively also visited Puri. But the historicity of such a view is yet to be established.

Historically speaking, the antiquity of Jagannatha can be taken to the second century B.C.when Kharavela was the emperor of Kalinga (the ancient name of Odisha). There is the mention of one Jinasana in the historic Hatigumpha inscription of the emperor on the top of Udayagiri hills near Bhubaneswar and though it clearly speaks of a Jaina deity, it is often identified with Jagannatha. But reliable materials in historical form are available from the 9th century A.D. when Sankaracarya visited Puri and founded the Govardhana Matha as the eastern dhama of India.

The place where each one of the four Mathas has been established by Sankara is known by the celebrated name of dhama which literally means, a sacred place. Puri is the dhama of eastern India. It is the traditional belief that a Hindu should visit these four dhamas at least once in his life and the prevailing practice is that, after visiting the other three dhamas, one must visit Puri dhama. The records maintained by the Pandas in the Puri temple contain reliable materials to show that for centuries past, people from the whole of India have been visiting Puri in course of their pilgrimage.

The main temple in Puri is surrounded by about 30 temples, small and big, a listof which may be seen in Chapter 8. They were Put up at different periods of history by different periods. Even to, this day, the pilgrims are generally advised by the Pandas to visit and offer worship in almost all these temples before they are taken to the Jagamohana or the porch to see the presiding deities in the sanctum sanctorum.