Let’s start with the meaning of vyuha , it is a arrangement of the army divisions to attain a specific objective at the end of the day’s war. Every day the commander in chief of each army will arrange the army in a specific formation, so that his army can attain the objectives of that specific day. Depending on the the objective, risks, threats, opportunities, the choice of “Vyuha” was made.

Now you may wonder, How can such a huge army re-structure itself in the middle of the war? How can so many soldiers change positions, tactics and decide what to do when a key personnel dies or the attacking army changes it’s formation?

It needs to be noted that the army is composed of soldiers from various kingdoms. Each general from a Kingdom is well equipped with the decorum, code of conduct and technical details of a “Vyuha”. But ordinary soldiers, cavalry and infantry men don’t know those things and they would have to be ordered to move and re-structure themselves. This was done through the code of big drums, Trumphets, Sankhs and other horns which would instruct the army what to do.

Following are the different Vyuhas used in the Kurukshetra war

Military formation on a pattern supposed to resemble a Heron with outstretched beak and spreading wings. Krauncha vyuha, a very offensive formation, was generally attempted to induce fear in the opponent army. Pandava army was arranged in this vyuha on the second day of the Mahabharata war. Drupada was at the head and Kuntibhoja was placed at the eye. The army of the satyaki formed neck of the Kauncha bird. Bhima and Dhristadhymna formed both the wings of the Vyuha. The sons of Draupadi and Satyaki were to guard the wings.

The Heron Formation (Krauncha Vyuha) was usually met with Garuda or eagle Formation’Eagle is a Natural Enemy of Heron.Note the Swoop of the Garuda, nullifying and swamping the posture of the Heron. In its form, the Garuda Vyuha resembles the Krauncha vyuha, On the second day Bhishma arranged his army in Garuda vyuha to counter the Krauncha vyuha of the Pandavas. Bhishma himself got posittioned at its beak. Drona and Kritavarna were the eyes. Kripa and Ashvatthama were at the head. The Trigartas the Jayadratha with their armies made the neck. Duryodhana, his brothers, Vinda and Anuvinda made the body of the formation whereas King of Kashala, Brihadbala formed the tail of the formation 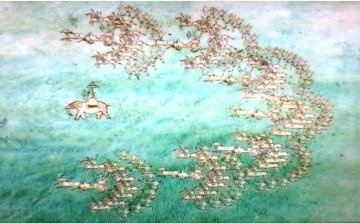 It was a defensive circular formation very difficult to penetrate. The Commander-in-chief, situated at the centre of hte formation, usually leads the army and is surrounded by several small groups of armymen, each grup lead by a Maharathi. On the seventh day of the war Bhishma made Mandala Vyuha.The Pandavas countered it by Vajra Vyuha. 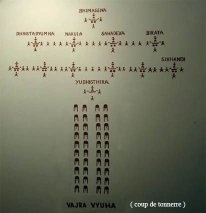 Pattern of vajra vyuha by pandavas on 1st day

On the fifth day of the war, Bhishma chose to arrange his army in Makarvyuha. Arjuna, Yudhisthira and Dhristadhyumna decided for the Hawk formation of their Army. All the warriors of both sides were assigned to specific places in the formations with special responsibilities. 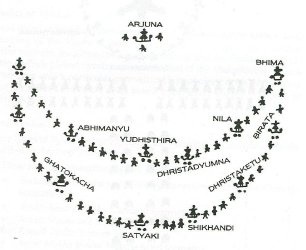 Arjuna arranged this formation in consultation with commander of Pandava army Dhristadhyumna on the 12th day of the war. his arrangement. At the right end was the powerful Bhima. Abimanyu was at left end. Ghatotkacha and Kokaya brothers were at the left rear. Satyaki, and five sons of Draupadi were at the rear centre. Yudhisthira was placed at the center of the formation. The armies of Drupada and Virata led from the front guarding Yudhistira. Neel and Dhristadhymna were placed next to them with Dhristaketu and Shikandi following at the rear end. At the tip was Arjuna at his Chariot with Krishna. Observe the above pic 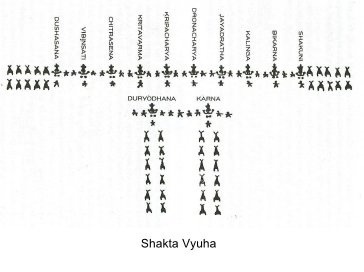 Shakata vyuha is an array in which the army is draw up in a narrow and compact order and its rear expanding in extended columns like the back of an Indian cart. Drona used this formation on the 11th day for the Kauravas

This was the formation used by Bhishma on the 1st day of the Kurukshetra war. The head of the formation had 6 Maharathis arranged in a circular form and the rear end is shaped like a rod (Dand) to keep resourcing the head. 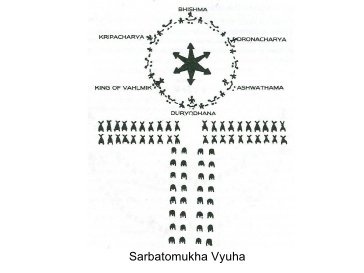 The Suchimukha Vyuha was not used as a stand alone vyuha in the Kurukshetra war. But on the 14th day of the war, Drona created a complex triple layered formation called Chakrashatak Vyuha . First was the Chakravyuha where he was standing guard himself. That Vyuha opened in to the second Sakatavyuha the charge of which was in the hands of Duramarshana, the brave brother of Duryodhana. At the third tier was the Soochimukha Vyuha (shaped like the mouth of a needle) with Karna, Bhurishrava, Ashvatthama, Salya, Vrishasena, Kripa to guard it and Jayadratha was at the very end of the Vyuha.

Chakra means “spinning wheel” and “vyuha” means formation. Hence, chakravyuha means the puzzled arrangement of soldiers that keeps moving in the form of a spinning wheel. Rotation of soldiers is very similar to helix of a screw commonly seen in watches. The Chakravyuha, is a multi-tier defensive formation that looks like a disc and this is most deadliest military formation

The Chakravyuha keeps on moving in a spherical order and can easily lead the component away in captivity as well. Formation of Chakravyuha is never visible from the ground. But anyone from above can easily decipher the movement.

Usually, there were seven layers, level 7 being the innermost layer consisting of strongest soldiers. Soldiers of the inner level were technically and physically stronger than the soldiers of the immediate outer level.

Now let’s see how warrior will be trapped in it ,observe the below pic carefully

Firstly it needs to be noted that the formation is not visible from the ground, simply because each of the layers of the maze are not in fact a single row of soldiers, but a huge battalion of army which has a depth of tens or hundreds of soldiers, and the path between between 2 layers is also multi fold wide through which a battalion could pass through. So from ground, it would simply seem to be a big passage on either side of which the enemies’ army are busy fighting. Only the inner row is facing the warrior or army that passes through the maze. The outer layer is busy facing the next outer passage. 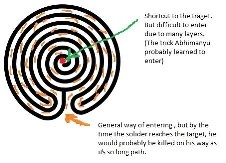 Open the above image and see it carefully .So irrespective of what one does, the Chakravyuha is designed to engulf the enemy, and either kill him as he goes through the maze, or spare his life, but weaken him until he’s taken captive along the route. This makes it one of the deadliest formations. 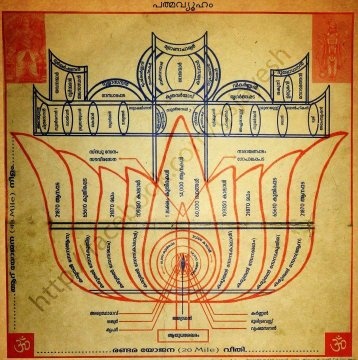 The Padma Vyuha is often confused with the Chakravyuha, and many writers use these terms interchangeable. There is considerable difference between these 2 formations though there are quite some similarities as well. Similar to Chakra-Vyuha, this is a multi-tired defensive formation in the form of a blooming lotus when viewed from above. Again only a handful of warriors knew the technique of breaching this formation.

On the ninth day Bhishma went for a Vyuha called Sarvatobhadra Vyuha which meant safe from all sides. Bhishma was in the front, Guarded by Kripa, Kritaverma, Shakuni, Jayadratha, Kamboja and sons of Dhritarastra. Trigartas were also there. The Pandavas formed a Vyuha called Nakshatramandal vyuha in shape of a constellation. The Pandavas and sons of Draupadi were leading from the front. Shikhandi Chekitan and Ghatotkacha were holding important positions to defend. Abhimanyu, Kekaya brothers and Drupada were guarding the rear.

This formation is used to confuse the opponent. On the tenth day the Kauravas army chose, Asura Vyuha and the Pandavas countered it by arranging their army in Deva Vyuha. In the lead was Shikandhi with Bhima and Arjuna to protect his sides. Behind him were Abhimanyu and the children of Draupadi. Satyaki and Dhristadhyuma were with them. Virata and Drupada had two charge of the rest of the army. Kekayu brothers, Dhristaketu and Gatotkacha were in their ranks. The Pandavas had the single pointed aim to kill Bhishma and were successful in that.

The Kurmavyuha was formed by Bhishma on the 8th day of the war. The Pandavas countered it with the Trishula vyuha.

Formation will be just like big waves in the sea , particular trained groups can only do this .

On the afternoon of the 8th day, Bhishma changed his formation to Oormi Vyuha. In this formation, the army is arranged on either side like the waves of the sea. Arjuna chose Sringataka Vyuha to counter-attack this formation.